The sleep disorder, insomnia, afflicts (according to some resources) about one-third of the adult population. Considering the number of prime-time advertisements for drugs to combat the condition, insomnia is difficult and stressful. Some people find relief; others are less successful. For many, the illustration below tells the whole grim story:  Here I Am! 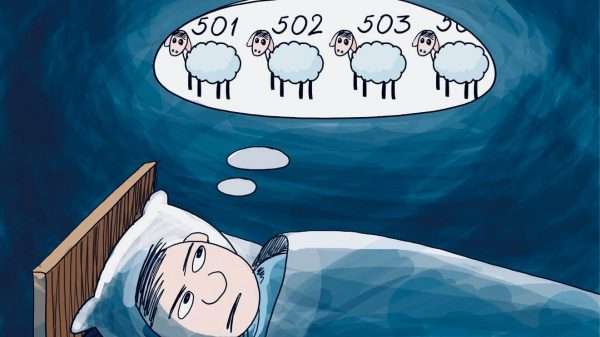 As I’ve gotten older, I’ve experienced sleeplessness more than I’d like. I’ve posted before about how my brain occasionally refuses to shut down. Whether it’s the cares of the world or an intriguing set of words that wriggle their way into poetic form, I never know which prompting will tear the covers off a good night’s sleep.

The story of Samuel, God’s Old Testament prophet and priest, provides a beautiful narrative involving sleeplessness. Read the chapter. Samuel is only a child.

Samuel’s mother has given her son in service to the Israeli priest Eli … and by extension, in service to Yahweh, the God of Israel. Read the first chapters of I Samuel to understand the huge step of faith Hannah (Samuel’s mother) made by committing her only son (from boyhood) to serve the Lord.

In a unique moment on one particular night, God audibly called the boy. “Samuel!” Of course, Samuel believed (at first) he was being called by the elderly priest. The text tells us in verse 7:  “Samuel did not yet know the Lord, nor had the word of the Lord yet been revealed to him.”

But on that night, as the young boy lay sleeping in his bed, God called Samuel to be His representative (in Eli’s place) to the people. I can just imagine how Samuel might have felt bewildered and even frightened. After all, God had explained to the boy (that same night) His plan to judge Eli’s house and to set aside Eli’s unfaithful sons in preference to Samuel. (I wonder if young Samuel ever got back to sleep that night?!)

When I reflect on Samuel’s experience, I’ve contemplated what my own response might be (often is) to midnight disturbances. I’m prone to languish in a chair, wondering whether returning to bed is even a reasonable option … or is it only going to increase my frustrations?

Experts suggest it’s better to avoid looking at electronic back-lit devices. (The blue light intensifies sleeplessness.) That means both computer and books in digital form are technically disallowed … but often my default alternative to coping with insomnia.

Maybe it’s a good thing Samuel didn’t have a large clock with illuminated hands hanging on the wall above his bed. At least one clinical advisor notes “watching the clock is a huge detriment to sleep.” (There are 2 clocks in my bedroom.)

Through the years, I’ve thought about Samuel’s encounter with our Creator. The sonnet below shares some of my reflections.