With the short attention span so common in today’s culture, it’s easy to look at the life of the main character in The Book of Job, acknowledge his unfortunate (and prolonged) situation, then yawn, shrug and move along. As my four-year-old grandson occasionally exclaims:  “Boring!” We might be amused by another person’s disaster shown on a YouTube video, but the awkward moments better come quickly or our attention will be drawn elsewhere.

Over the last several months, as I’ve been studying through Job, I’ve meditated on his suffering and composed a sonnet for each chapter. Unfortunately, arriving at the 17th chapter of Job, there’s a sense we’ve already traveled down this road. Job’s friends have chided him, he’s responded to their monologues and the entire exercise repeats itself. Just as with a prime-time episode of CSI (at whichever city), the tendency is to expect (even demand) some resolution by this point!

In this chapter and last week’s chapter/post, Job delivers another reply to his comforters’ contention that God would remove Job’s suffering if only he weren’t so stubborn about admitting his sin! Job refutes their accusations, but mostly addresses his remarks to Almighty God.

Thinking about Job’s suffering this week, I contemplated a modern-day Job, someone whose life experience has awful parallels to the ancient story. His name is Dr. Gary Oliver; I don’t know him personally, but he and I have several common connections. He’s an energetic author, speaker, counselor, university and seminary professor associated with my alma mater, John Brown University. The school has named an endowed chair in his honor. Oliver is passionate about healthy families and thriving marriages. Read his bio (linked above) for the full details.

Dr. Oliver also speaks occasionally at the church we attend. I’m including a link here of an audio presentation entitled Surprised by Gratitude that Dr. Oliver gave several years ago. Briefly, Oliver suffered through throat cancer several times, then his wife (Carrie) of 27 years was diagnosed in 2005 and fought a two-year battle with pancreatic cancer, including multiple aggressive treatments she underwent to remain alive. Then, as Carrie was in the final stages of her disease, their middle son died in May 2007. Two months later, Carrie’s disease took her. During that same period, Oliver’s only sibling (a sister) died.

Listen, if you will, to this audio testimony of a modern-day Job and compare Dr. Oliver’s story to that of the biblical character. All those aforementioned trials were considerable and yet after Carrie’s death, Dr. Oliver also endured another cancer, this time with his tongue. Do you think I’m wrong in suggesting he has endured similar pain and suffering to Job’s?

In an online journal Carrie kept during the two years of her cancer struggle, an early entry includes a quote on hope by author and psychologist Dr. Archibald D. Hart. It’s a lengthy quote, so I’ve extracted only the last couple sentences here: “… if you give up on hope, you give up on life itself.  If hope dies, you die.  As a friend of mine once said, ‘As long as you keep hope alive, hope will keep you alive.'”

Looking at Job’s monologue in chapter 17, the striking question (to me) is in verse 15:  “… where then is my hope — who can see any hope for me?” Job had concluded that hope was an unreachable goal for him. In the context, it seems he finds the grave more desirable than holding onto hope. When we consider Hope just a token, it’s easy to understand why Job would give up. The sonnet below reflects something about that feeling of hopelessness. 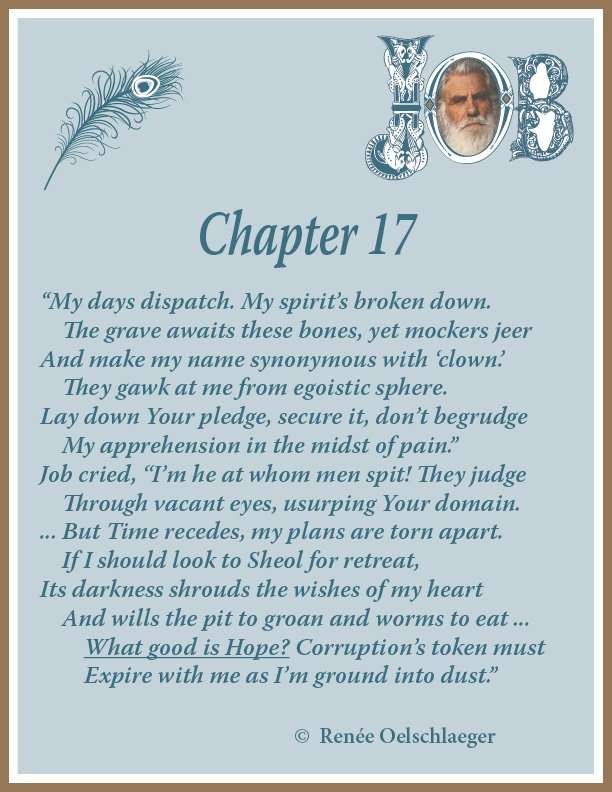