When considering Christian praise and worships songs, a cursory examination confirms many of the songs associated with faith refer to God’s greatness. Consider one song as an example: How Great Thou Art, a worship hymn based on a poem written in 1885 but commonly associated with the baritone voice of Billy Graham’s long-time associate George Beverly Shea. He first performed the song at a Billy Graham crusade in 1957.

Though How Great Thou Art may be one of the best-known songs that speaks to God’s greatness, there are so many more! Chris Tomlin‘s How Great Is Our God has been a popular standard over the last decade. From the late 1980s, Rich Mullins enjoyed great success with his composition, Awesome God. It would be difficult to count how many such songs there are, but I imagine you have several that come to mind.

Resuming my study of The Book of Job, this week’s post brings us to Chapter 26 where Job responds to Bildad’s brief statement in Chapter 25. It’s an interesting chapter because Job isn’t going to argue with the truth of Bildad’s assertions in the previous chapter – what Bildad said was true! But there’s no getting around the sarcasm in Job’s reply. (If Job were living in the 21st Century, he’d possibly heave a sigh and say, “No duh!“)

Instead of challenging Bildad then, Job’s inference seems to be that Bildad is the blind squirrel who is occasionally successful in finding an acorn. He has stated the obvious and Job suggests in verse 4 that someone else has even set the words in Bildad’s mouth. Then Job goes on to acknowledge the truths about God. The chapter soars with word pictures of God’s greatness.

I really like the picture of the earth above surrounded by the text of verse 7! In today’s sonnet, I also attempt to capture some of those word pictures depicting the greatness of God. Job 26 includes fourteen verses, so capturing in fourteen sonnet lines the full impact of Job 26 would be a feat, and as it turns out, unlikely. (I don’t like to say impossible, but certainly improbable.)

It’s sort of an interesting side note that our most recent chapters in The Book of Job have shifted away from the discussion of suffering. Though there’s limited discussion of man’s sorry state and poverty, the theme is less about who man is than who God is … or at least their perception of who God is.

Every time I study The Book of Job, I’m more in awe of how inadequate ordinary words are to encompass the full nature and capacity of our God. As Job himself notes in verse 14, what we know and can definitively say about God is barely skirting the outer margins of His vast majesty and might. Think about the Universe itself which we know is seemingly limitless … and God is bigger than His Creation! Such a blessing to know and be known by Him! 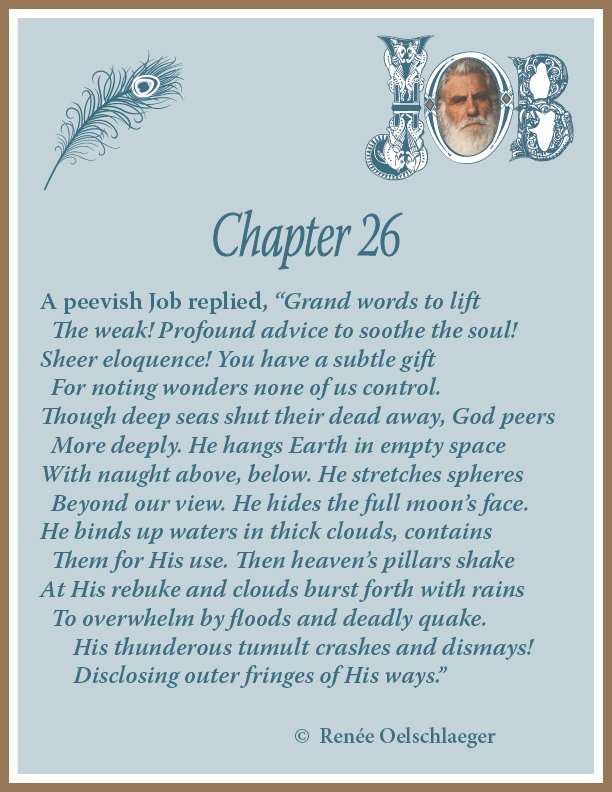