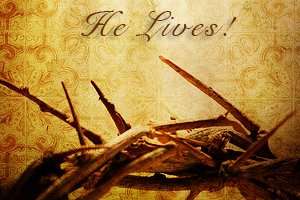 The Sabbath had come to an end. A new day began to dawn − Sunday, the first day of the week.

As the sun rose, the women who followed Jesus were already on their way to the tomb. Even though they knew the body of Jesus had been placed in a tomb, they hoped to prepare his body for a more permanent burial. Getting that task underway in the cool of the day was preferable.

They were still reeling from the reality of their friend’s brutal crucifixion! They hadn’t been able to visit the tomb on the Sabbath, but now they could minister to Jesus’ body; it was the least they could do for him now!

Sometime before their arrival at the tomb, a severe earthquake had occurred. Matthew tells us (28:1-10) an angel stood at the opening of the tomb, having rolled away the stone. The appearance of angels (“like lightning” with garments “as white as snow”) would have terrified anyone. The guards who’d been stationed at the tomb were so frightened, they “became like dead men.”

But the women (who may have been afraid at first … since an angel told them “Don’t be afraid.”) were unwilling to be put off. They were “… looking for Jesus who has been crucified. He is not here, for he has risen, just as he said 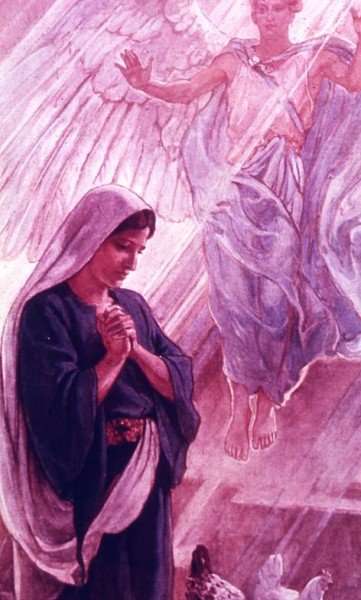 Imagine their delight! He’s alive? He’s really alive? They must have pinched each other just to confirm they weren’t all dreaming! He’s alive! We’ve got to get to Galilee! “They departed quickly from the tomb with fear and great joy and ran to report it to his disciples.”

The women ran to report what they’d seen and heard, but the disciples responded with predictable skepticism, suggesting the women were speaking “nonsense, and they would not believe them.” But Peter got up immediately and ran to the tomb.

When Peter “… saw the linen wrappings only … he went away to his home, marveling at that which had happened.” Peter didn’t return to where the disciples had been. Instead, he went home, ready to begin a new chapter in his life … following a risen Christ!

For me, I’m drawn to the narrative where Jesus appears to a weeping Mary. She sees a man whom she supposes to be a gardener and she asks where they’ve taken Jesus. Her grief has been unremitting and now she thinks, they’ve stolen his body away. But, the moment Jesus calls her “Mary!” she recognizes him. When she runs to tell her friends, she joyfully announces, “I have seen the Lord.”

Each of the Gospels includes numerous appearances of Jesus Christ following his death and resurrection. These appearances may seem trivial to some, unlikely to others, imaginary to others still.

Personally, I find these accounts amazing and exciting. Think about the disciples huddling in their meeting place (or residences) on the Sabbath Day after Jesus had been crucified on Good Friday. Not a one of them has any inkling of what will take place on Easter morning. They remained devastated, cut to the core, not a shred of hope to grasp, all of them wondering how they could have been so mistaken! More than likely, each one of them had listened to Jesus, but what they heard was what they chose to hear … as many times as Jesus had told them he was going to Jerusalem to die, when it actually happened, the disciples were stunned!

We don’t have a complete account of all the times Jesus appeared to his friends before he ascended into Heaven. The Gospel accounts were never meant to be exhaustive works detailing every aspect of Jesus’ life on earth. The entire Bible contains more than 31,000 verses. The final verse of John’s gospel states:  “There are many other things that Jesus did. If every one of them were written down, I think the whole world would not be big enough for all the books that would be written.” (John 21:25)

But we know this:  during his lifetime (as reflected within the Bible’s text), Jesus predicted his own death and subsequent resurrection. The disciples and all who followed Jesus simply missed it. But the story doesn’t end there. Jesus also said he’s coming again.

He is risen … JUST AS HE SAID!