In multiple other posts on this blog, I’ve written about music. From the time I was old enough to verbalize, I sang. All through my early years, I soloed often and joined with various music groups to express myself vocally. After I sang a class assignment (rather than speaking it), my seventh grade speech teacher declared I’d be famous someday! (So glad that never happened!) During junior high and high school, I was part of a trio and a quartet that traveled to perform in other venues (including on television). 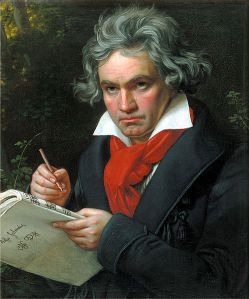 When I arrived at college, I thought at first I’d major in music. (Again, so glad that never actually happened.) I was part of two traveling music groups in those years and that experience more than satisfied any desire I (never) had for the road.

This week, I enjoyed a delightful post, The Voice of God, at the blog fairlyspiritual.org. In four brief paragraphs (less than 250 words), this young writer aptly describes something about the essential connection between our Creator and music. He says the melody of Creation was more song than command … and I agree. Many of the classical masters did as well.

Before you misunderstand, I’m not just talking about religious music or classical music or any particular sub-heading of music. I’m talking all music … music with its beauty and design was birthed in the Creator’s mind. Composers (made in the image of the Creator) have the innate ability to create their music as an expression of our Creator’s image.

The sonnet posted below was originally written while I listened to Beethoven‘s Piano Sonata No. 14, popularly known as the Moonlight Sonata. The actual piece to which I was listening was from the first movement (of three), the Adagio sostenuto. When my children were quite small, this was one of several selections I’d play (on the piano) after they’d been tucked in for the night.

This particular Beethoven composition is memorable for its triplet repetition and the mournful (or what I’d call contemplative) tone. In my twenties, I didn’t play (or listen to) much classical music, preferring the pop music of that day (hence, my reference to Manilow). Returning to classical music in my later twenties, I remembered how an exposure to classical music when I was a youngster had been a great foundation for this lifelong music lover.

Of course, that was something I wanted to instill in my own children! When I played for them at bedtime, it was an early effort to encourage their love of music … and also to give me a small chance to keep my (now-stiffening) fingers limbered up (way back when).

So, I invite you to read the sonnet, and while you’re reading, click here to enjoy the audio file.