A wise man might say Laughter is the best medicine, but long ago, I learned there is an appropriate time for laughter. Likewise, I learned there were certain occasions that called for me to keep my big mouth shut. (Thankfully, this crucial lesson came early in my marriage.) Discretion … exercising good judgment in delicate situations. In Job Chapter 30, we find Job still stuck in the doldrums and his first sentence is a complaint:  But now they laugh at me.

At the end of chapter 29 (see last Sunday’s post), Job was recalling his former status and how he’d helped people, ministering to their needs. By the conclusion of the chapter, he’s hasn’t stopped the suffering and he hasn’t regained equilibrium, but recalling the good he’d done seems to have lifted his spirits … if only a bit.

In chapter 30, he plunges back into the emotional cellar. I think there might even be an implicit After all I’ve done for them, now they’re laughing at me! Such ingrates! Such dogs! They deserve to be outcasts!

Further on in the chapter, we learn the onlookers weren’t just laughing at Job. They were using his name as a “byword,” a cruel deed in any era. Children in grade school aren’t the only ones to turn names or nicknames into unkind epithets. I can’t remember what grade it was, but I well remember one boy calling me Grenade. Apparently, he thought it was a close enough rhyme to Renée to reflect his clever grasp of language. (May his name be forgotten forever!)

Another thing about Job’s complaint, they were kicking him while he was down, so to speak. In the middle part of the chapter, he mentions the toll his sickness has caused. He can’t sleep because of the pain. His garments appear to be suffocating him. Then in the closing verses of the chapter, he provides additional details about his physical state. Friends who sat beside him no doubt observed his situation … and knew he wasn’t overstating his case.

Today’s sonnet offers a summary of Job’s complaint. He suffers unremitting pain and yet is being taunted by the rabble that lives in caves down by the river. Perhaps if he wasn’t in pain, he might have responded differently, but as things go, Job just hopes to die. Woe is he. 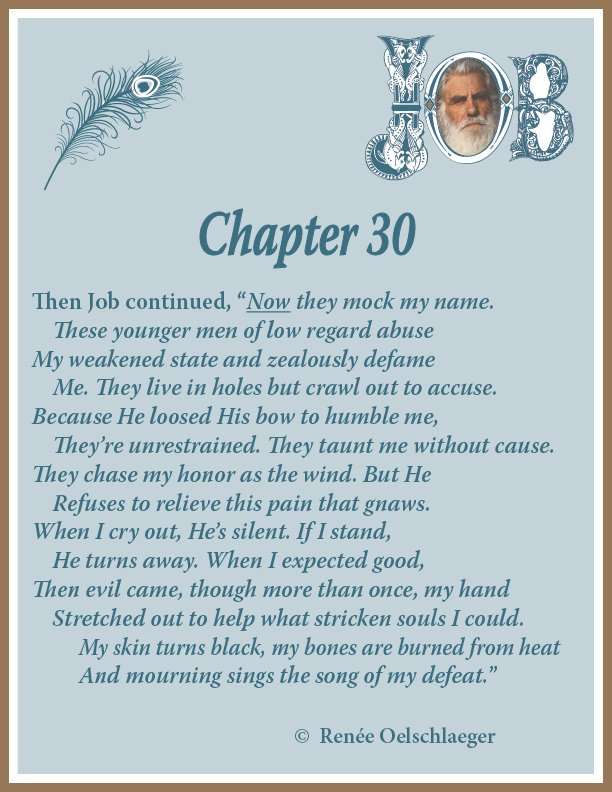