Resources show the observation going further back than Pennsylvania, all the way to pagan observances in Europe. Another interesting fact has to do with Gobbler’s Hill, the spot where Phil’s underground burrow is located. The spot appears to have gotten its name because part of the historic celebration included feasting on … groundhog! Naturally, I’m wondering:  did Phil’s prognostications turn the celebrants against him and bring about his execution? Six more weeks? You won’t be around to see them, you worthless rat!

Seems to me, whether Phil predicts six more weeks of winter or reports that Spring is on the immediate horizon, we still endure the weeks leading up to the first official day of Spring (between March 19 and 21). Technically, Phil’s supposed prognostications are amusing but useless. (I suppose I might feel differently if I were a merchant in Punxsutawney PA whose bottom line depended on the hoopla immediately before and during the February 2nd events.)

Another word for groundhog is woodchuck (the Marmota monax). (Hence my title question.) Interestingly, the name is derived from the Algonquin term wuchak which has nothing to do with wood. If someone asks “how much wood would a woodchuck chuck … ?” the correct answer is:  NONE!

Tipping my hat to the entrepreneurs in Punxsutawney, I offer today’s light verse as a small contribution to the much larger commemoration of burrowing, furrowing rats whimsically awakened before daybreak. Anyone have a good recipe for groundhog patties? 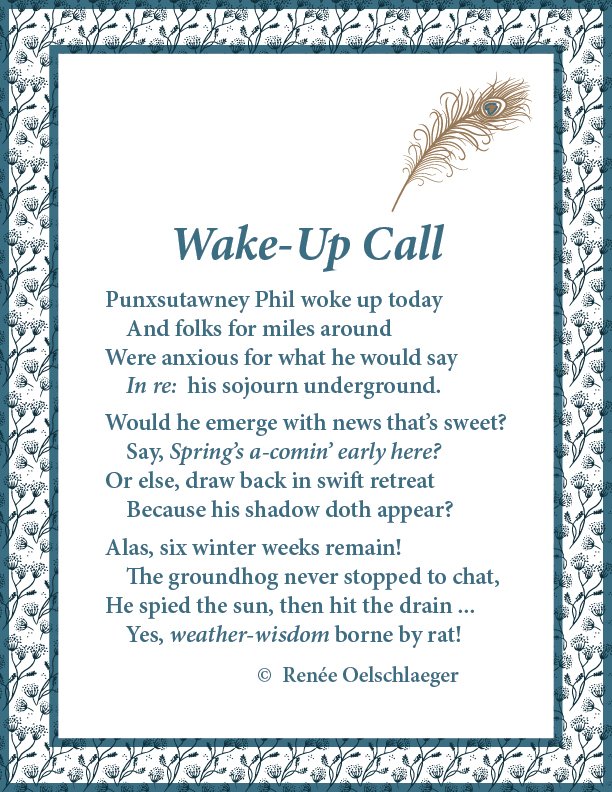