When my children were babies, there were many nights I’d lie with them in my bed until they fell asleep. Once sound asleep, they’d be carried to another bedroom and a familiar crib for the remainder of the night (hopefully). This routine allowed for cuddle time and a peaceful transition from wake to sleep with a minimum of commotion and/or distraction. For very young ones, getting into a good sleep routine can be difficult. 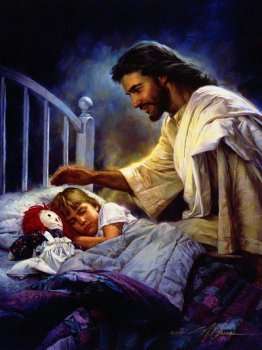 Of course, the habit of bedtime stories started at an early age. Once the story ended though, cuddle time began in earnest. Because our bed was (is) a waterbed, it was easier for me to “rock” my babies to the motion of a waterbed than with the creaky, squeaky sounds of an upright rocking chair. I’d engage a gentle back and forth motion on the bed and the babe would quickly relax into this subtle reminder of his or her in utero development.

During those quiet times together when I could tell the child was struggling for sleep that wouldn’t come (even with the rocking motion), I’d quietly sing a song in the child’s ear, usually Jesus Loves Me. Whether I sang through the song once or even several times, the soft music delivered a calming response as the child’s breathing would slow and stabilize to tranquil relaxation.

Thinking about this routine today, I thought how simple that little song is. Written as a poem by Anna Bartlett Warner around 1860, the poem was composed for use in a work of fiction written by Anna’s sister Susan. The book, titled Say and Seal, introduces the poem (on page 115). The story line shows a father attempting to soothe his dying child. The father (Mr. Linden) is slowly carrying the child in his arms as he takes “soft, measured steps” around the room. The child asks his father to sing and Mr. Linden does so, singing:

Jesus loves me—this I know,
For the Bible tells me so;
Little ones to him belong,—
They are weak, but he is strong.

Jesus loves me, —he who died
Heaven’s gate to open wide;
He will wash away my sin,
Let his little child come in.

Jesus loves me—loves me still,
Though I’m very weak and ill;
From his shining throne on high,
Comes to watch me where I lie.

Jesus loves me—he will stay,
Close beside me all the way.
Then his little child will take,
Up to heaven for his dear sake.

I haven’t read this book and was unaware of its existence prior to my curiosity that demanded an online search. I’m struck how similar the fictional father’s actions were to my own (though I thankfully never had a dying child).

When I was a little girl, I remember memorizing other verses to the song. When I began to sing the song for my little ones as part of their bedtime routine, I tried to recall the verses I’d learned in childhood. Apparently by the time my children arrived, certain of those lyrics had been banished due to cultural sensitivities. Here are several of those now-disgraced lyrics:

Jesus loves the Indian boy
Bow and arrow for his toy
Big Filipino, wee Chinese
Living far across the sea.

Jesus loves the Eskimo
In the land of ice and snow,
And he loves the cowboy too
With his horse and rope lasso.

Jesus loves the African girl
With her hair so full of curls
And He loves the Australian too
In the land of kangaroo.

Jesus loves the Irish lad
When he’s good and when he’s bad.
And He loves the Scot’s boy too
In his kilt and bagpipes new.

Jesus loves the Kiwi boys
Even though they make a noise
And He loves the Brownie girls
With their badges, frocks and curls.

I’m slightly amused by the good intentions related to this song. Somebody (missionaries? Sunday School teachers?) wanted to add lyrics to the song that would give it cultural currency for children in other countries and people groups. An understandable and kind intention, don’t you think? But as the tides turned, somebody else found the verses offensive, deciding the stereotypes were far too inflammatory to be allowed.

And this I also know. Jesus is “the name that is greater than any other name … every person will bow down to honor the name of Jesus. Everyone in heaven, on earth, and under the earth will bow. They will all confess, ‘Jesus Christ is Lord,’ and this will bring glory to God the Father.”