There were particular authors whose works I enjoyed. I devoured stories by Alexander Dumas. I read and re-read The Count of Monte Cristo. Ditto for Mutiny On the Bounty (by Charles Nordhoff and James Norman Hall). Such adventure tales helped my imagination soar; in a way, I was able to live the adventures in my head.

When the BBC production of The Musketeers became available for viewing, I knew I’d have to view this latest iteration. (Through the years, I’ve viewed similar productions, some of which were enjoyable.) Of course, there’s plenty of sword-play and action in this 3-season series. There’s also skullduggery and romantic interactions.

The four main characters (Athos, Porthos, Aramis and d’Artagnan) are a mix of mystery, humor and macho. While heroic, the characters were portrayed (subtly) as womanizers. I suppose that’s an element one might predict in a modern (2016) production.

The historical characters are portrayed well, some are sympathetic, others are just predictable rogues. Viewing their characters on-screen drove me to research, wondering whether the production offered accurate portrayals. Accurate or not, I concluded the royals and the religious leaders of that era were certainly an interesting, egotistical lot.

Mostly though, it has been Dumas’ written words that animate these heroic characters, so I decided it was time to read the book again. I wasn’t disappointed. The work is long (especially in a Kindle format) but with a setting during one of France’s most intriguing and significant times, Dumas engages the reader with several sub-plots.

One sub-plot revolves around the alliances between nations, a mishmash of royal betrothals in order to prevent one nation from attacking another. There’s also the conflict between religious philosophies. Would France successfully drive the Huguenots out and retain their thoroughly Catholic dominant beliefs? These are undercurrents that effect the royal families as well as the peasants and the Musketeers often find themselves in the middle of the squabbles.

Still, their heroism shines bright. They exhibit supreme loyalty to their king and queen, a devotion to God and charity towards the people with whom they come in contact. There are times their loyalties (particularly to the king) are severely tested (and from my 21st century perspective, strained to the breaking point)! They perform deeds of kindness without needing to receive due credit.

When I began re-reading  The Three Musketeers, I didn’t expect anything beyond a good and enjoyable reading. But something unexpected happened. As I delved into both the book and history, I began to notice interesting parallels between the Musketeer’s life of adventure and the Christian walk.

One of the repeated themes is One for All and All for One. The Musketeer motto reflects a bond so strong, they’re fearless soldiers to the death. If they must defend their king (even when he has committed despicable wrongs), they are sworn to defend him, even if they perish! Whenever a battle occurs, these men are in the thick of it, unwilling to back down from what must be done.

As my reading progressed, the idea of One for All and All for One simmered on the back burner of my brain. A sonnet slowly formed. 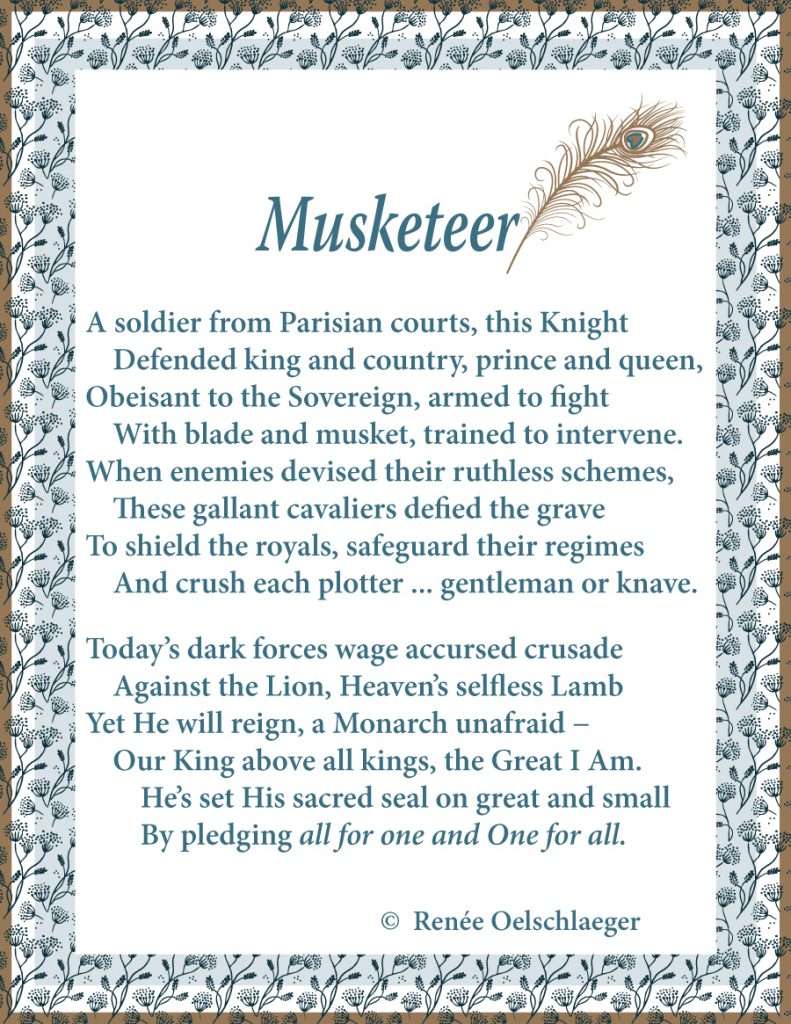 The Great I Am never demanded an extreme life-or-death loyalty as Louis XIII expected from his Musketeers; yet in contrast to any earthly king in history, the King of Kings (Jesus) performed the ultimate sacrificial act, by dying Himself … One for all.