Remember Y2K? Also known as the Millennium Bug, it was a digital challenge for computers wherein their internal clocks would turn over to “00” (as in the year 1900 instead of 2000) because software had been generally designed with only two digits instead of four. 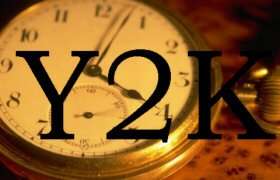 In the days that lead up to the calendar moving from 1999 to 2000, computers weren’t as ubiquitous as they are today. While the first so-called “smartphone” was introduced in the mid-90s, it would still be five or six years before better-developed devices became fixtures in our hands or back pockets. The inventions of iPads and other tablets? Still a future away.

Looking through some file folders this week, I ran across some playful verse that was clearly written before (and in anticipation of) the year 2000. For some people, the problem of Y2K was the root of serious hysteria. I pencilled a list of possible outcomes (tongue in cheek, of course) to poke fun at the things I was reading and hearing at the time. My list was rhymed … though I’d hardly consider it deserving of the description poetry. Here are several of the notations, each of which had its root in something I’d heard or read referring to the supposedly inevitable disastrous outcome from Y2K.

Will there be day and night?
Will airplanes fall from flight?
Will sunshine be as bright?
Will people die from fright?
Will TVs lose their sight?
Will shoes become too tight?
Will engines not ignite?
Would you like Coke or Sprite?
Will phone lines be all right?

See what I mean? Not particularly clever … but there were plenty of hysterical rumors related to Y2K and the supposed possibility that certain computer functions would create terrible problems for the majority of unprepared Americans. (Here in our part of the country, I think this was the impetus for lots of people adopting off-the-grid living arrangements.)

Now, some fourteen years later, Y2K is a distant memory to most of us. This numeronym (a word where a number is used to form an abbreviation) ended up being mostly toothless in its bite.

– – But I have good news for those who tend to enjoy hysteria! There’s another problem similar to the Y2K bug that will be upon us in January of 2038! Think of it! You have almost a quarter century to develop serious stress-related illnesses in preparation for this future bug.

In the meantime, here’s a short piece of verse that was also part of the cache in my file folder. (Again, not even passably good poetry … but I was probably too distracted by the upcoming event to give it a better effort!) Stress takes a toll, you know.