So much for prognostications, huh? The spectacle surrounding a horse race, particularly at this elite level, is striking. First off, there’s the beauty and grace of these splendid horses. I can’t help but be in awe. There’s the pageantry, some 90,000 people gathered to cheer on their favorites … and perhaps to witness history being made, which in this case is exactly what happened.

My familiarity with horses is mostly from afar. I’ve ridden horses on occasion and enjoyed myself, but that’s about the extent of it. I have friends who engage in various competitions with their horses and they tell me it can become your life if you let it. But I can understand why people enjoy having horses, loving them and entering competitions with them. Being owner of a thoroughbred racehorse would be cool … unless something bad happened to your babies.

Thinking about the Triple Crown, this most coveted prize of thoroughbred racing, I imagined the excitement of the crowd in attendance at Belmont Park today. I have friends who attended and their excitement was contagious. I’m certain they weren’t the only ones whooping and a-hollering. Having the event produce a Triple Crown winner must have seemed like icing on the cake.

My musing moved from there to a song my dad used to sing. He often soloed in church and at other events. This song was among his favorites:  Will There Be Any Stars In My Crown? (The link will take you to a rendition of the song by Alison Krauss.) The song is, as one might suspect, a Christian hymn. It was written by a woman named Eliza Edmunds Hewitt (1851-1920) who was an invalid with a spinal injury for much of her adult life. The verse was set to music written by John Robson Sweney (1837-1899). 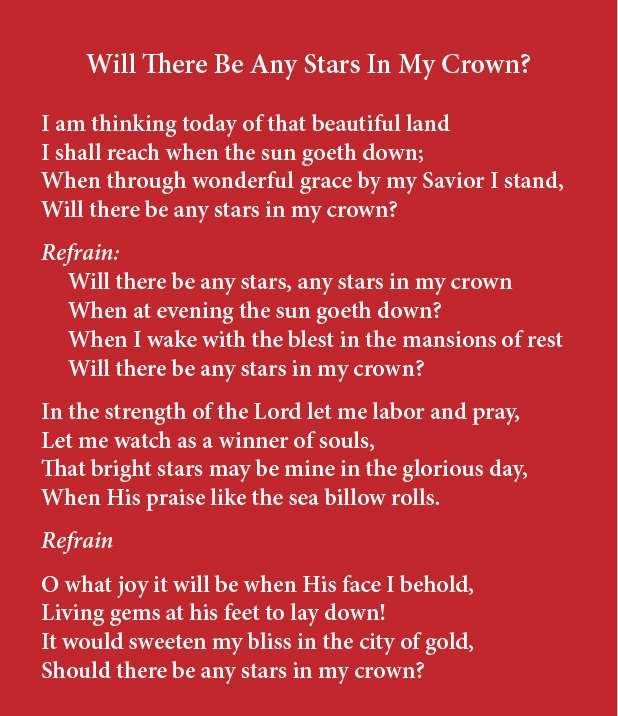 Seeing how excited the attendees were when American Pharoah had clinched the Triple Crown, I was reminded of a promise from scripture. In 2 Timothy 4:8, we’re told:  “… in the future there is laid up for me the crown of righteousness, which the Lord, the righteous Judge, will award to me on that day; and not only to me, but also to all who have loved His appearing.”

As exciting as a Triple Crown may be, I’m more excited about the crown of righteousness.