An August 17th Washington Post piece titled, Obama’s Vision of a Post-Racial America Looks Even More Distant Than Before, written by political reporter Chris Cillizza makes the point (following the events in Ferguson MO) that the President’s “… words have done little to heal the racial wounds in the country.” I suppose that point can be vigorously debated.

Most likely, I’d never have waded into this discussion … except for the highly-charged comments in a recent People magazine interview where First Lady Michelle Obama speaks of her 2011 trip to Target during which another Target shopper approached the First Lady and requested help reaching a product from the shelf. People quotes Mrs. Obama describing the incident:  “Because [the woman] didn’t see me as the first lady, she saw me as someone who could help her.” Mrs. Obama interpreted this event through the biased, racial lens. 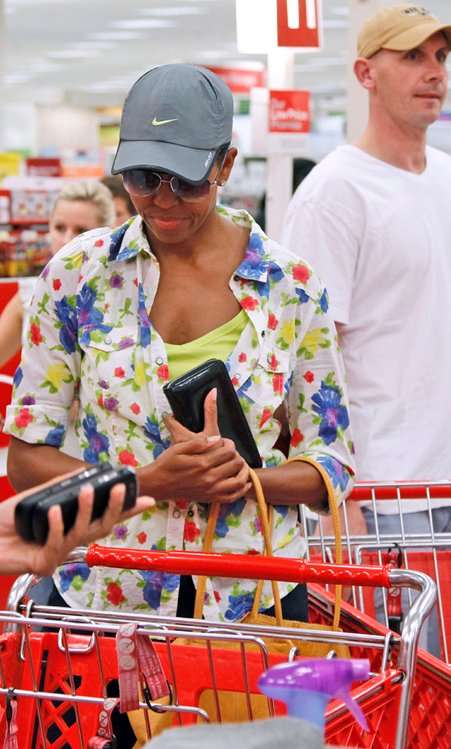 A couple things strike me about the First Lady’s reportage. The trip-to-Target story (linked above) appears on the CBSNews website with the bold headline, Michelle Obama Shops Incognito at Target and there’s a photo of her as she completed checkout. The story details Mrs. Obama’s look … she’s wearing a Nike baseball cap, sunglasses and quite ordinary clothes as she carries a couple bags and pushes a shopping cart toward the exit. If this report is accurate, she shopped with an assistant and there were Secret Service agents discreetly stationed inside (but not at her side) during her shopping visit. (Seriously. Look at the picture at right. Would you have recognized her?)

As I see this, when a famous person chooses to shop INCOGNITO, it usually means they wish not to be recognized. (Am I terribly naive?) Wasn’t the whole point of wearing a baseball cap, sunglasses and ordinary clothes so Mrs. Obama could blend in with the other Target shoppers? If Mrs. Obama had been accompanied by an entourage and worn elegant clothing (the accoutrements she sports wherever she wishes to be recognized), she’d have been spotted as she entered the store.

Let’s talk about another aspect of Michelle Obama which has nothing – absolutely nothing, zip, nada – to do with race. The woman is reported to be five feet, eleven inches tall. While I acknowledge there are probably women of every race and ethnicity who are taller, Mrs. Obama’s height is impressive. Put in perspective, I’ll compare her to myself … Mrs. Obama has eleven inches on me!

Being short has its share of disadvantages. At home, I have step ladders and step stools strategically placed for my needs. I have a tool I use to reach upper-shelf items. (I call it my grabbers, shown at left.) The grabbers extend my reach by fifteen inches. Perhaps if the tool fit in my purse, I might bring it when I’m out shopping?

Speaking from personal experience, I can’t tell you how many times I have stood in a shopping aisle waiting for some tall person to wander down the aisle in my direction … just so I could seek his or her assistance in reaching an object from an upper shelf. Yes, in my younger years, I might boldly scale the lower shelves to reach an item. I’ve also used ladders whenever available. To date, the people I’ve recruited to help me were never chosen because of my perception of their race. It was solely because he or she was taller than me.

In a sane world, most people are pleased to help each other. In a sane world, the Golden Rule (treating others as you wish to be treated) applies. In a sane world, evil motives are not instantly assumed because someone asks for help. There’s a standard of behavior that used to prevail in America where the strong helped the weak, where the advantaged assisted the disadvantaged, where we were taught to look out for our fellow men (and women). 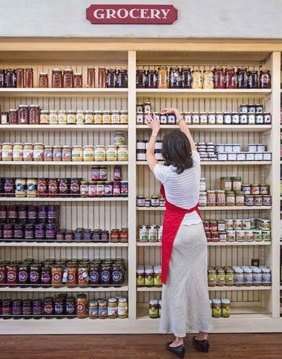 Instead of color-blindness as Dr. Martin Luther King, Jr. aspired to see … a country in which his children would be judged by the content of their character (rather than the color of their skin), it seems we’re now hobbled by individuals who judge everything through the prism of their skin color!

As with race, my stature was determined at birth. I have learned to adjust to it without ever construing someone else’s actions as motivated by stature prejudice. However, as I’ve reflected today on Mrs. Obama’s tale in the People article, I’ve come to realize I’ve been approaching my lifelong height disadvantage all wrong.

Wherever I shop, retail stores are doing a great disservice to me and a sizable segment of the populace … short people. Consider the amazing audacity of musician Randy Newman’s 1977 hit song, Short People. (How can I possibly live in a world where such insults are shamelessly written and performed … and adored by many … no doubt most of them Tall People!)

Like so many other special interest groups, the world’s short people have been given short shrift (as it were) for far too long! We deserve due consideration and it should begin by refitting store shelves so they don’t tower over us! I’m launching a new campaign to agitate for shelving that reaches no higher than five feet. Short people, are you with me?!! With store shelves refitted, all products will be within my reach. (And after all, it is all about ME.)

Once my campaign has succeeded, Michelle Obama will never have to worry about another Target shopper requesting help to pick an item from the shelf.

4 thoughts on “Race To The Top Shelf”