But the respite from my daily pattern was necessary and welcome … necessary because life demanded I attend other matters and welcome because it freed me (somewhat) from my irrational obsession to slavishly maintain daily posts – no matter what! With each day that passed, my figurative pencil grew more insistent and red-faced. Much to my surprise, people continued to drop by and read previous posts. (I am gratefully humbled by your interest.)

The dictionary.com website tells me vicissitude is a word “Few English speakers likely know ….” This assertion surprises me. It’s a word I like! May I suggest English speakers aren’t familiar with the definition because it’s easier to talk about change or phases of life. Change is something we English speakers understand experientially.

During my blogging hiatus, my mother celebrated her 89th birthday and was diagnosed with another blood disorder. As if being almost completely blind and having a genetic disorder known as Factor V Leiden (thrombophilia) weren’t enough! Now she has an added complication – thrombocythemia, a condition affecting normal platelet levels. (Before the diagnosis, she expressed anxiety the blood test results might indicate she had leukemia.) In my research, I’ve read resources claiming the condition is “rare” while other resources say it’s “common.” Which is it?

I can’t answer that question but it gave me pause when my mother said she was being treated with a daily dose of hydroxyurea. Would you be comfortable taking any drug with urea in the name?

It should go without saying … but cancer sucks. When my younger daughter was diagnosed with thyroid cancer in August, this was a sobering blow to all of us. She’s a young mother with three small children and an active life. With her usual aplomb, our daughter demonstrates her positive outlook on life. I think she deserves great admiration. Her August 21st FaceBook post (below) is an inspiring example of courage. 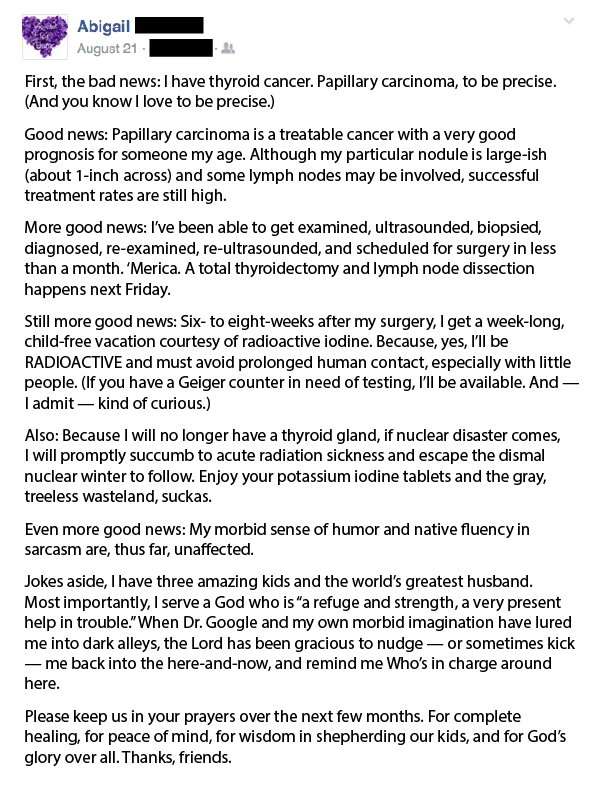 One’s troubles often seem monumental, but inevitably, we cross paths with others whose circumstances are even more dire. About the time of our daughter’s cancer diagnosis, one of her friends (also a mother a young children) was suddenly widowed. I can’t imagine the grief and suffering this young mother and her children have experienced, now and for years to come!

Update on The Book of Job

The seemingly insurmountable vicissitudes of life challenge all of us. Since finishing my sonnet study on The Book of Job, the universality of Job’s life continues to resonate with me. Following my final post on the book (eight weeks ago), I continued studying Job. I wrote additional sonnets, revised those I’d already written, and formatted the entire work into printable form … with the intention of future publication. The details have yet to be nailed down but it will happen and I’ll eventually post info in this space.

Given the vicissitudes of life, maintaining a blog can prove challenging … it can be either an enjoyable hobby or a compulsion (for people like me). In October of 2013, I launched into a 31-Day Blogging Challenge but instead of stopping (or slowing down) at the end of 31 days, I posted daily for almost two years. At this point, I’ve decided to adopt a less rigid schedule (so I’ll actually have time to write other things).

Thanks for sticking with me this far, and I hope you’ll continue to check in regularly. And don’t forget to turn your clocks back next Saturday night! (You’re welcome.)