My mother-in-law phoned this morning. For many people, this might be an ordinary event. More often than not for me, phone calls from her send a tremor of worry through me.

Because of her various life challenges, using the phone has become a complex operation; her dementia makes communication problematic, plus her hearing has diminished so she can’t always hear information clearly through the receiver. When I receive a call from her, my first thought is she needs emergency care or she’s fretting about an imagined crisis. (Prior experience has borne this out.)

As far as I could tell, today’s call was due to neither. I’ll describe the scene. I was sitting in my living room, having poured a second cup of coffee to enjoy with my quiet time. My Bible was open to Job 13 and the second verse (in part) says:  “I am not inferior to you.” I was reminded this statement also appears in Job 12:3, so I turned back the page at the same moment my phone rang. 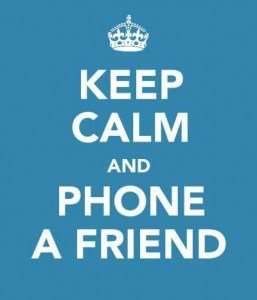 ASIDE:  Even before her dementia, we were not typical phone buddies. If I called her, it was for a specific purpose; it was the same whenever she called me. But seeing her name on the caller id, the words of Job echoed in my brain:  I am not inferior to you. Indeed, this dear soul (made in God’s image and bearing His likeness) had reached out and I wasn’t going to brush her off because her words were frequently garbled or nonsensical.

When I answered, she never addressed me by name. I’m not entirely certain she knew what number she had dialed. However, she didn’t communicate a state of fretfulness. The conversation had moments of coherence and there were other moments when she babbled. She seemed concerned because her Christmas decorations were still in place in her apartment, but when I told her I had yet to remove my own to storage, she responded with hearty laughter and relief. “I’m so glad I’m not the only one!”

She told me about her advanced age, though she wasn’t quite sure her exact age nor the date of her birth. I reminded her she’d attained an age most of her family members could not boast. She proudly acknowledged this true statement. When I mentioned how blessed she was, she again agreed. “I’ve had a wonderful life.” I seconded her observation, adding, “We’ve both been blessed.”

Eventually, she began to retreat from the conversation, mentioning how her age was wearing on her, admitting she felt tired. I asked her if she realized my Beloved (her second-eldest son) had visited her yesterday. (He came to her apartment at 7 p.m. and she was already in bed, fast asleep.) She chuckled and repeated, “I’ve been very tired. There’s too much to do!” As the call continued, she became slightly disoriented, seemingly puzzled about why we were talking and soon thereafter the conversation ended.

Returning to my quiet time, Job’s observation replayed in my head. My mother-in-law, suffering from the impenetrable bewilderment of dementia, is hardly different from me. She’s definitely not inferior, though her quality of life makes her days admittedly difficult and lonely and confusing.

With the few snippets of understandable conversation from our phone call, I got another small glimpse behind the curtain of her massive disability and it quickened my heart. I know she’s still there, those brief moments of clarity prove it. I long to tear off the mask of this cruel impairment, but like Job, I am (we are) left to wonder at (and yes, even to question) God’s unfathomable grace in our lives … always through the lens of human frailty.