I love the picture (above) of von Bora. This portrait was painted by a close friend of their family, a German Renaissance painter who also painted a portrait of Martin Luther. In this picture, I see a resemblance to The Good Wife‘s Julianna Margulies. To me, the portrait depicts a beautiful woman, a no-nonsense presence who possesses quiet, bridled strength of character and soul.

Katharina’s life story reads like a novel. After her birth (in 1499), she lived with her family briefly; some accounts indicate her mother died. Katharina wasn’t even five years old when her father delivered her to a Benedictine cloister, presumably for the education he could not (or would not) provide. By her eighteenth birthday, she had taken vows to become a nun.

Over time however, Katharina (and other nuns in her circle) became acquainted with Luther’s extraordinary actions to break away from the Roman Catholic Church. Certainly, this would have been something thoughtful devotees to religious orders would have wanted to know about. An intelligent woman, von Bora found Luther’s arguments (the aforementioned 95 Theses) compelling and she chose to leave the convent.

In those days, leaving a religious order wasn’t as easy as packing one’s bag and casually walking out the door. Eleven other women in the convent shared Katharina’s desire to leave. Their eventual escape (hidden inside barrels formerly used to transport and deliver fish) was orchestrated by Luther and others who understood the women wished to renounce their vows.

Luther proceeded to be a protector for these women, seeking husbands or family situations where they’d be cared for. Finally, everyone but the vivacious Katharina von Bora had landed a suitable marriage (or found safe living quarters). Though von Bora had the attention of several suitors, she expressed her desire to marry either Luther or his close associate.

With the age difference (she was 26, he was nearly 42), they found humor in the situation. Luther agreed to marry Katharina, but he joked that, besides bringing happiness to his father, their marriage would rile the pope and cause the angels to laugh and the devil to weep. It was his way to give strong testimony to his status as a former priest whose only fealty was to the Lord God. 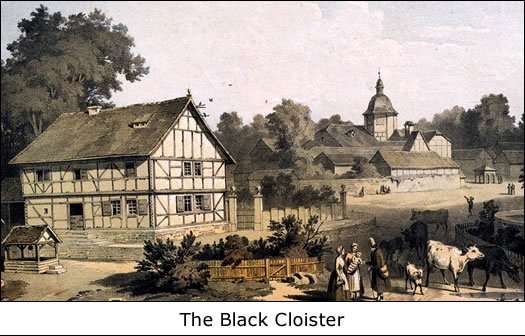 Given the imposing man Martin Luther must have been, Katharina von Bora was well-suited to be his wife and she proved her capabilities. Six children were born to the marriage. At least four orphans also became part of their family.

Luther’s teaching attracted students from other areas and the Augustinian monastery where they lived was large enough (40 rooms) to house a fair number of students. In addition to feeding the various guests from day to day, von Bora cared for the grounds and gardens and livestock and she also brewed beer. When the need arose, she also served as a nurse when the cloister housed numerous sick individuals.

An aside:  My fascination with von Bora and Luther is partly rooted in family history. Luther was born and died in the German town Eisleben. The town’s name is similar to a name in my family tree. Eisleben is also located about 30 miles from Halle, the home of my Stricker forebears. Luther is known to have preached several times in Halle. Who knows? Maybe one of my relatives was tutored by Luther!

Katharina von Bora (for whom Luther had multiple endearing nicknames – Doctora Lutherin … My Lord … My Chain … The Morning Star of Wittenberg after her habit of rising early every day) was in fact the proverbial Renaissance woman for early Reformation times. She managed to bring order and thrift to his living situation, she handled his financial affairs and like the woman of Proverbs 31, she enhanced their financial circumstances through productive endeavor.

When I think of von Bora, I can’t help but also think of women today, many of whom are cloistered behind the oppressive burqa, the majority of whom are viewed as chattel and property. The story of Katharina von Bora’s escape from her religious order is a story of hope and freedom … she and Luther set a high standard for serving God in a complementary marriage and their ministry together touched many lives.