If we even spend the time thinking about pressing events around the world … and specifically, on the continent of Africa … it might involve sending a tweet – #BringBackOurGirls – or a series of tweets if we’re deeply concerned. The troubling situation with Boko Haram in Nigeria or the fight against Islamist militants in Mali that has resulted in 31 UN peacekeepers being killed since 2013 … these are the news stories that generate attention. And, as if anyone could forget, the Ebola outbreak that has caused deep concern around the globe also carries danger for us, not just people in Africa. In a sense, all eyes (and prayers) are focused on the African continent right now.

This morning though, I have to admit my attention was focused on something a bit more mundane, while at the same time remarkable. As I stood in the shower with steamy-hot water raining down on me, I experienced a renewed appreciation for an ordinary thing, something I mostly take for granted because I’m privileged to live here in the US.

(Yeah, I know … you thought I was going to talk about Ebola, right? Fooled ya’!)

Like most everyone I know, I’m a spoiled American. I get up in the morning, shower without thinking, grab food for breakfast that has been refrigerated or toasted or cooked over an indoor kitchen range … and I don’t think twice about how wonderful it is to enjoy these conveniences! If I had to carry water from a creek before making my morning coffee, do you know how cranky I’d be? If I had to gather fresh eggs from a hen-house or get up before dawn to mix and then knead bread dough, I’d likely stay in bed!

So this morning, I was contemplating that stream of water and thinking of a dear friend, someone who was a fellow student when my Beloved and I were in college, who currently lives in Rwanda. He’s a single guy and adventuresome (way more adventuresome than me!). And boy, is he having an adventure now!

Every couple weeks, our friend sends an email about his latest experiences. The last couple of posts have caught me by surprise. In the first one (posted below), he relates the challenges of bathing/showering in Rwanda. Since first reading this email, whenever I take a shower, I’m reminded how fortunate I am that I don’t have to concern myself with whether cockroaches will join me in the shower. (Actually in that sense, I like my showers routine and uninspiring!) 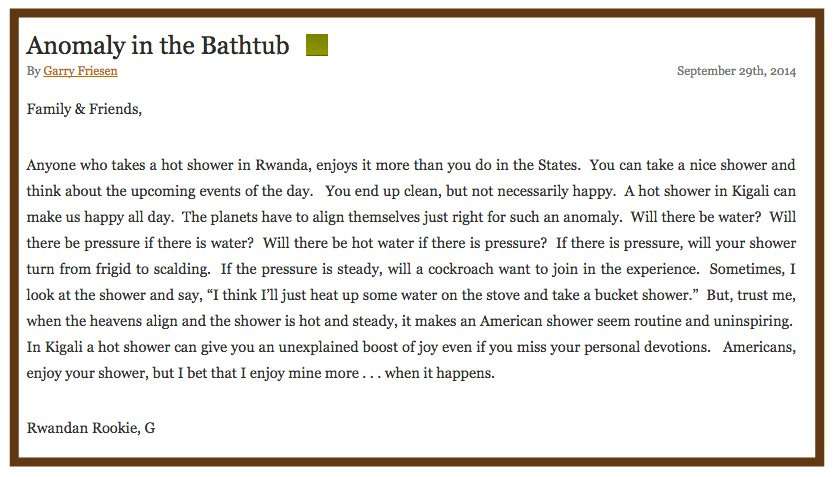 After reading my friend’s description of his living situation, I can’t deny I also feel a twinge of guilt enjoying my hot shower! But the twinge of guilt rarely lasts for long. I’m pretty quick about setting those thoughts in the back recesses of my mind … I mean, I have places to go, people to see!

I remember one time on a camping trip years ago where we really “roughed” it and had to utilize the “sponge bath” approach to cleanliness. As things turned out, I was capable of doing “sponge baths” for a couple days without becoming too crotchety, but over the long term, I knew there wasn’t much likelihood of re-developing any real pioneer instincts at this point in my life.

A couple days after the first email on methods of Kigali bathing conditions, my friend sent a second missive related to the first and further expanding on the joy of seemingly mundane pleasures. His perspective is often amusing, but even as he relishes what I and Americans like me take for granted, he has reminded me how blessed I am to live where hot showers can be a daily occurrence! 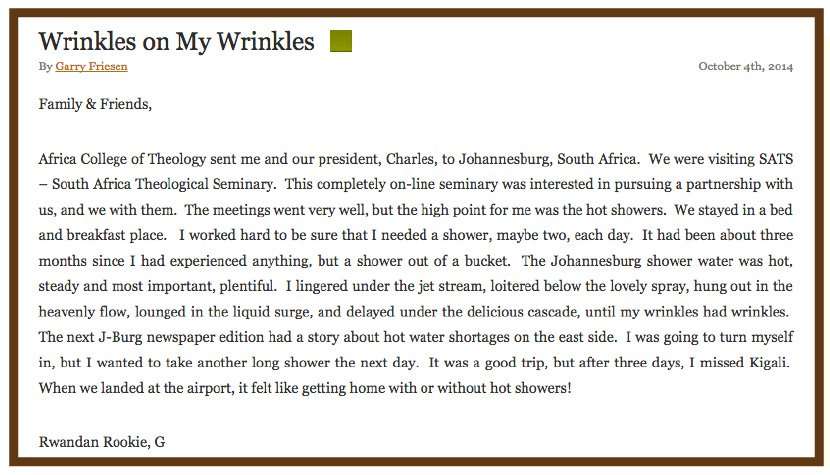 Our friend Rwandan Rookie lived for many years in Oregon. If I didn’t know better, I’d wonder if he had anything to do with California’s historic drought!

For me, I’m grateful to my friend for reminding me to appreciate the delights I often (and habitually) take for granted, plus to thank God everyday that I only have to walk to the other room to enjoy the luxurious spray of a piping-hot shower. Rwanda’s a long way off.