An accident occurs along the interstate. Usually on an interstate, metal-colliding-with-metal is going to happen at a high rate of speed, thus increasing the likelihood of injury and/or death. Whether it’s a simple fender-bender or a more serious multi-car pileup with injuries and even fatalities, most drivers respond in a predictable manner.

They react with natural but morbid curiosity. They will avert their eyes from the road to see what has happened. In such instances (even for accidents that occur across the median) normal interstate traffic chokes to a crawl. Like sick voyeurs, we find our eyes irresistibly drawn to the misfortunes (perhaps even bloody misfortunes) of others.

I wonder about this rubbernecking of culture. The death of Robin Williams (see yesterday’s post here) was only the latest example of this phenomenon. First, we had the 24/7 media storm. Not just the simple fact that Williams was dead, but instant retrospectives appeared, featuring his life and artistic portfolio, even online photo displays of the inside of his home. There was an intensity in the examination that felt creepy … almost as if his underwear drawer had been laid bare for public scrutiny.

Secondly, there were press conferences and the release of official comments from various individuals and eventually the medical examiner’s statement. My sense was that because a pre-suicide death watch had been denied, reporters and news readers desired a fitting denouement in the form of painstakingly detailed post-suicide coverage. Again, creepy. 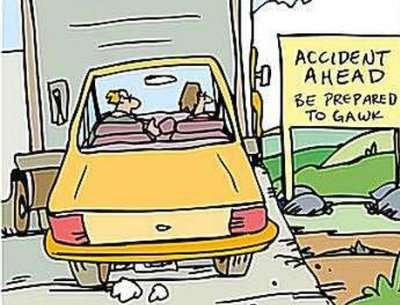 It’s not only the sudden deaths of celebrities that elicit this rubbernecking response. Just standing in line at the grocery store provides for the casual reader an example of exactly who the magazine publishers and vendors have anointed to be the most likely objects for our rubbernecking. All things Kardashian or Justin Bieber (or whoever the latest phenom is) send the general populace into paroxysms of adoration.

The beautiful people, the once-beautiful people (now hideous because of disastrous plastic surgeries or other calamities), the aging and often clueless, or the walking dead (not the series but celebrities venturing out sans makeup) … all of them are fair game because their lives seem less glamorous under the camera’s glaring lens and we can freely gawk at their misfortunes. Seeing celebrities humbled and vulnerable allows us to feel less humbled and vulnerable.

Consider one aspect about which I’ve posted before:  divorce. Though my previous posts on divorce didn’t include direct references to the comic, Robin Williams is known to have experienced two divorces. Recent studies reflect divorced men are at significant risk for suicide. One April 2014 blog post has the title:  Divorced Men 8 Times As Likely To Commit Suicide As Divorced Women. This blogger references a 2003 study discussing this conclusion. In interviews, Williams spoke candidly about his angst due to the breakdown of two marriages.

The public rubbernecked Robin Williams through many movies and television productions, public awards and private failures. As with other celebrities, we were fed regular gossip about his marriages/children/rehab/divorces/charitable acts, etc. Social media faithfully fed the public’s insatiable habit.

Yes, the celebrity of Robin Williams was symbiotic. He loved the public’s adoration; the public loved him back. But like a flesh-eating disease, this kind of celebrity surely takes its toll on both celebrity and the public.

I think this is where the rubbernecking culture becomes harmful. When rubbernecking occurs along the interstate, our inattention to the task of driving safely ends up causing further highway turmoil, may even lead to additional accidents!

Whether driving down the interstate or living our lives, rubbernecking takes our eyes off the task at hand. We’re unable to prevent the accident (or self-murder) that has already happened, but we still have the ability to navigate our way to safety if we keep our eyes focused on the road directly ahead.