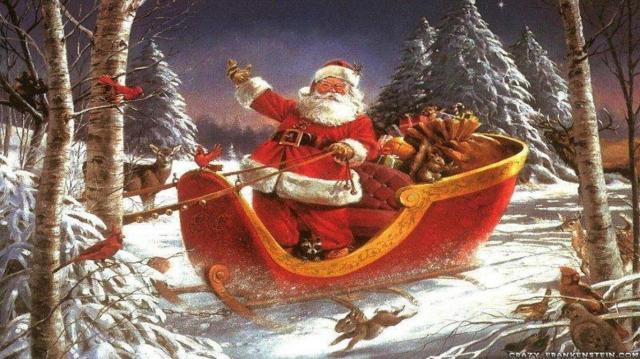 When I was about eight or nine years old, I remember lying in bed on Christmas Eve, too excited to fall asleep! We lived in a tiny, story-and-a-half bungalow. On the first floor, there was a parlor just inside the front door, a dining room behind that, an eat-in kitchen off to one side, a small bath and a back porch (that had been converted to bedroom space). At the back of the kitchen, a narrow stairway led to the half-story rooms above (I suspect this was also converted space, previously an attic).

I slept in a small single bed situated at the top of the stairs. (I don’t think that bed could accurately fit the description of a “twin” bed; it was narrow like an Army cot … and may well have been!)

Even with this upstairs area being “converted,” it still wasn’t technically bedroom space (no closet, no doors to shut for privacy). My room was more of an alcove/pass-through area with a low, sloped ceiling. An opening (no actual door that I recall) opposite the stairs led into a larger space where my two brothers slept.

At this point in my life, I was old enough to have experienced and remembered past Christmases (and birthdays) but young enough to still be amazed by the wonder of Christmas. I’ve always had an excitable stomach, and on this occasion, I well remember the impossibility of sleep because my belly churned with butterflies!

Shortly before bedtime, Mom and Dad had brought out wrapped gifts and placed them under the tree. (They wouldn’t dare put presents under the tree earlier, too much temptation for little ones … and even my older brother and I were not to be trusted.) We’d had night-time stories, prayers and cuddles before climbing the stairs to our beds. Before long, my brothers and I were “nestled all snug in our beds.”

But my excitement was such, I could not transition into “visions of sugar plums” dancing in my head. I simply could not sleep!

I was surprisingly alerted by the sound of bells! Naturally, at first I wondered if I’d nodded off and mistakenly dreamt I’d heard bells. But I continued to hear the tinkling sound and knew immediately something exciting was about to happen!

These bells were not sounding on the rooftop, there was no clatter or sound of reindeer lighting on the rafters overhead. No, what I heard came from below. The problem (for me, a consistently compliant child) was my parents had a very strict rule about getting out of bed once we were settled in. Disobedience on this particular night might mean disaster on the morrow. What to do? What to do?!

I don’t know how long I waited, breathless with anticipation. It seemed like forever!

Then suddenly, the sound of a footstep placed on the bottom step and the bells ringing once more, closer now. Listening as the carrier of the bells proceeded halfway up the stairs, I heard a bellowing voice exclaim, “Ho, Ho, Ho!”

By now, of course, I could hardly contain myself! I was sitting anxious and expectant at the end of my bed. Could this be real? The stairway light (a bare bulb) was switched on and a large figure with a snow-white beard and clad all in red and white came within my view.

My brothers immediately joined me near the stairs, all of us jumping and squealing with excitement! Santa was there … right in my bedroom! Santa had come to visit us … three school-age, insignificant children!

Here’s what we learned about Santa. I can confirm he was “dressed all in fur from his head to his foot.” His clothes were not “tarnished with ashes and soot.” He did have a pack slung over his shoulder; whether or not it was a “bundle of toys” we could not determine − he said our gifts would be under the tree when we awoke next morning.

He didn’t have a pipe, nor was he “chubby and plump,” though he was in manner a picture of a “jolly old elf”. He was, in fact, notably tall and slender and his voice sounded remarkably like … someone we knew and loved already.

Santa stayed maybe ten minutes and he left with a parting “Happy Christmas to all, and to all a good night!” As soon as Santa disappeared back down the stairs, my brothers and I returned to nestle separately in our beds.

That’s when I experienced what was likely my first encounter with cognitive dissonance. The joy of having Santa come for a visit was tempered by my awareness of dear Uncle Harvey being clothed in a Santa costume. As I lay in the bed, I had to weigh the facts and land in a rational place. Though I’d never found it necessary before, I dearly wanted to believe in Santa. But I couldn’t deny the facts of that night … much as I wanted to do so!

Looking back on Santa’s visit, I recognize this was a milestone on my path to growing up. I could delude myself and cherish an illusion that Santa is real (if only for a few additional years). Or, on the other hand, I might choose to bitterly reject Santa (and everything associated with him), knowing the entire episode was a charade.

I chose a third path. Imagination brings so much riches into our lives, and embracing the Santa myth fed something in my soul that night. (Today, I’d identify that yearning as C. S. Lewis did:  the inconsolable longing.) It wasn’t Uncle Harvey and it wasn’t Santa that stirred my soul − it was the truth, beauty and goodness of myth (in the classical sense) that invaded my deepest, most heartfelt imagination.

Uncle Harvey, our very own Santa, left this earth in 2008. My vivid memories of him go beyond the Christmas gift of his presence that he gave my brothers and me. In my mind’s eye, I see his placid face with just a hint of playfulness turning the corners of his mouth upward. He was my dad’s oldest brother and how my daddy loved him!

Every Christmas, I remember the time Santa came to our house … and I will always cherish the magic of that brief encounter.

[Throughout this post, I’ve borrowed phrases from ‘Twas the Night Before Christmas which was originally titled A Visit from St. Nicholas. I acknowledge this classic poem from Clement Clarke Moore.]