I use the word puzzling because even as the Post article acknowledges the President will be roundly criticized by certain groups for “diminishing the presidency,” they concede “… it’s just Obama being a weirdo.” Further, the headline seems to admit a certain diminishment and solicits opinions about which one is worst of all! Haters will hate, as we’re told.

Leaving the discussion of perceived diminishment of the presidency to others, I wanted to delve into the selfie itself. Given the ubiquity of smart-phones, almost everyone has the capability for snapping selfie after selfie. Add to that the availability for displaying one’s mug on numerous social websites and is it any wonder that self-portraits are everywhere?

What a great age this is in which we live! Artist Vincent Van Gogh had to reproduce his mug on canvas with paints and a brush! Imagine what he’d have been able to do with a smart-phone! As it was, he did quite well in producing numerous self-portraits – selfies – even with the obvious limitations an artist of the late 1800s would have encountered.

In its current iteration as a 21st century phenomenon, the selfie has been the cause for laughs, embarrassment, shame and even occasional arrests. There’s a kind of common exhibitionism that runs through the veins of people who snap their selfies and then post them online. Not all of us are prone to this behavior.

Interestingly, a study conducted by an Ohio State University professor made news on the OSU website in January. Results of the study were published in an online professional journal ($$), but the news article summarizes what the study found in its research of a male cohort whose habit was to post a high number of selfies on their social sites.

As might be expected, the research revealed “… men who were more likely to edit their selfies before posting scored higher in narcissism and self-objectification, which measures how much they prioritize their appearance.” With some 800 men in their sample, the author of the study said, “Most people don’t think that men even do that sort of thing, but they definitely do.”

How about another sample to counter the conventional thinking that it’s only silly girls who take selfies? The photo at left is said to be from 1920, one of the “first” selfies. Not an adolescent female in the group that I can see.

A bit more amusement might include Wired’s story from January 2014 of The 10 Best Photos From the Selfie Olympics. A Selfie Olympics? Yes, but I can’t find that they brought it back for a 2015 edition. Perhaps the event has gone on to other venues, though, because in recent days there are numerous Twitter posts bearing the phrase #SelfieOlympics. 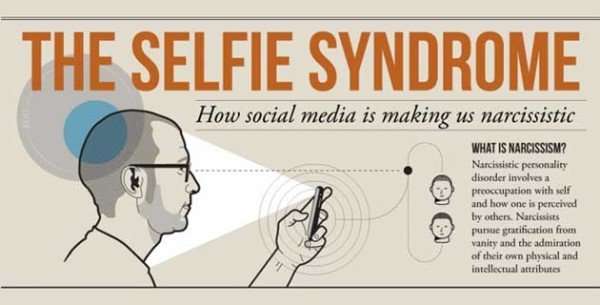 An enlightening article at Trendweek unpacks what they’ve titled The Selfie Syndrome. Citing a couple studies (other than the OSU study referenced above), Trendweek illustrates a progressive scale for narcissism and connects it to increased (addictive?) use of social media. They conclude by asking the question:  Is narcissism an inevitable reaction to our social culture?

The OSU professor says she’s doing followup research, centering on the selfie behaviors of women, and the preliminary information reveals similar patterns as with the male subjects.

For me, the idea of having taken a selfie is embarrassing; actually posting a selfie is almost unthinkable! Images of Geraldo Rivera and Anthony Weiner come to mind and that level of self-indulgence doesn’t appeal to me at all! But then again, if it’s good enough for the President … and for Vincent Van Gogh, well …?!

No, I don’t even want to go there.

5 thoughts on “Self-Indulgence and the Selfie”