Wikipedia provides an interesting chart (pictured below) reflecting the status of alcoholic beverage sales by county throughout the United States. The blue counties are wet, the red counties are dry, the yellow counties are a mixture and both West Virginia and Louisiana are governed by local preference. 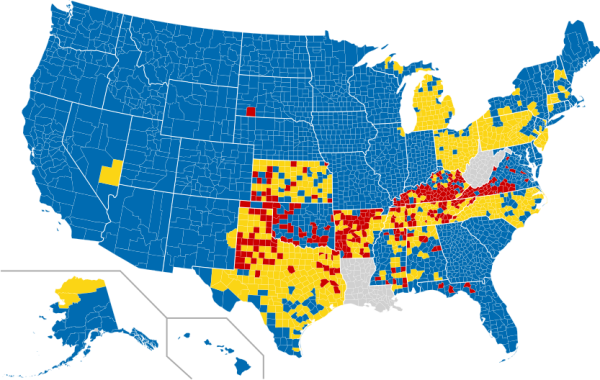 The 75 counties in my state of Arkansas present a colorful tapestry of mostly dry counties mixed with a smaller number that permit alcohol sales and a couple others where beverage-sale schizophrenia reigns. After years of having the issue on ballots almost every election cycle, Benton County (just north of us and the home location for WalMart’s headquarters) voted in 2012 to become a wet county.

Few liquor stores are open on Sundays, but I happen to live near a small community where Sunday sales are permitted. I’ve always wondered about that. Do people wake on Sunday morning in a sudden panic because they failed to stock the beverage larder with enough brewskis to get them through until Monday? It’s just not a mindset with which I identify.

Sunday blue laws have a long history, not solely directed at prohibiting sales for alcoholic beverages but also designed to govern Sunday labor. However, a number of states with blue laws on their books no longer enforce those laws.

Many years ago (I’m guessing it may have been concurrent with one of the local wet/dry votes), I wrote this tongue-in-cheek verse. With National Poetry Month winding down, the poem presents a sardonic approach to the Chicken Little hysteria that often accompanied these votes.

I’m always amused when issues such as this one come up on the ballot. The proponents usually paint a glowing picture of all sorts of good that will come if what they consider a “bad law” is soundly defeated by the voters (and subsequently removed from the books). Likewise, those who hope to maintain the status quo paint a picture of far-reaching and awful ramifications to come if their desires don’t win the day. I suspect the truth usually lies somewhere in the middle.