Throughout the preceding thirty-nine chapters of The Book of Job, we have a poignant picture of a great man brought low through misfortune and physical pain.

As I contemplate Job’s story, my focus lands on two significant elements. First, I recognize the historic Job as an Everyman, the quintessential character in an ageless tale of humanity and sin. The second element I see (one that provides crucial context) is the behind-the-scenes heavenly drama which occurs outside our human realm.

If we were not aware of conversations from the heavenly realm, The Book of Job would offer almost no significance for us … it would be just another tragic tale of a poor sap who expresses his legitimate grievances with an absent, distant god.

Ignore the side-story distraction of Job’s bumbling friends, aka comforters. I can’t speak for others but I’ve known my share of Job-like comforters, friends who were more gifted at rubbing salt into a wound than ministering to my pain. I’ll go a step further … I daresay from time to time, I myself have been an oafish and clumsy comforter.

But God … when He speaks, Job quickly acknowledges his unworthiness (Job 40 verse 4). Chapter 40 is a continuation (from the previous chapter) of the Almighty’s discourse with a brief parentheses where Job confesses his accusations are unfounded and cause for intense shame.

I think it’s interesting that God hears Job’s confession (verses 3-5) but He continues to challenge Job, finding it necessary to underscore the most basic truth … Job is not God! The Creator dares Job to exert god-like power (if he has it) with thunderous speech (verse 9) or by adorning himself with glory and splendor, honor and majesty (verse 10). Of course, Job realizes again how small and un-god-like he actually is.

I composed two sonnets from this chapter. The first distills the dialogue between the Lord and His servant Job. There’s a striking conclusion in verse 14. God has challenged Job to prove his divinity – to act like God if he can. If Job can achieve that goal, God says, “Then even I would praise you, for your own strength would save you.” (This quote comes from the New Living Translation.) 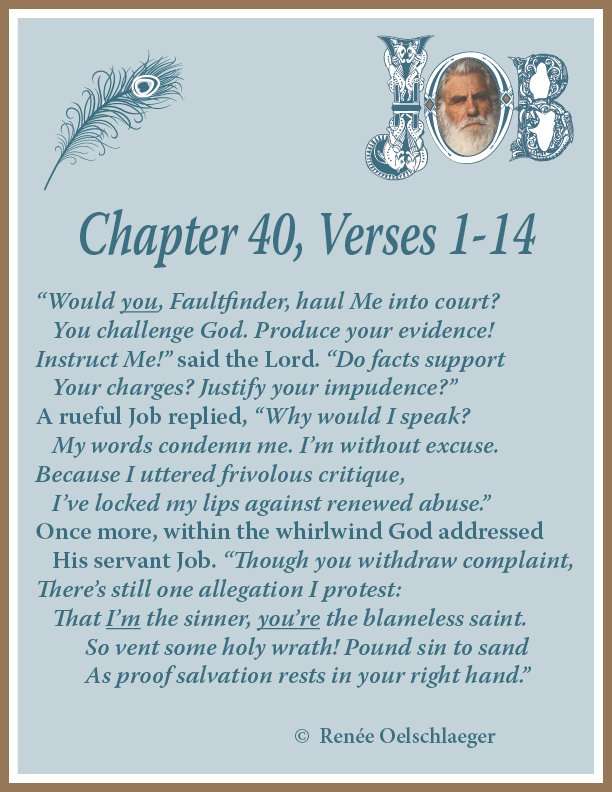 The second sonnet from Job Chapter 40 focuses on an animal identified in most Bible translations as Behemoth … but rendered Hippopotamus in a handful of translations. It’s not important what the actual genus of this beast is. What is important is God’s instruction to Job:  look at this animal who is massive in size but humble in his existence – he eats grass, for heaven’s sake! God reminds Job, “I made him just as I made you.” (verse 15)

As I read God’s description of this marvelous (and monstrous) being, I’m struck by his size but also by his apparent harmlessness … he’s not a predator. He’s not even a meat-eater. Other wild animals play nearby (verse 20), undaunted by his physically imposing stature.

What does God want Job to learn from Behemoth? In part, I think Big B is an example of God’s provision for each of His creations. The mountains yield food for Behemoth (verse 20) and the rivers provide hydration for his massive thirst.

The larger lesson, in my view, is the contrast between Job and Behemoth. Job’s strength isn’t enough to save him (verse 14) just like the strength of a mighty animal (identified as Behemoth) is utterly dependent upon the Creator’s provision and mercy.

Yes, even as God cares for the animals, big and small, He deeply loves those created in His image (you and me). “For we are His workmanship, created in Christ Jesus for good works, which God prepared beforehand so that we would walk in them.” (Ephesians 2:10) 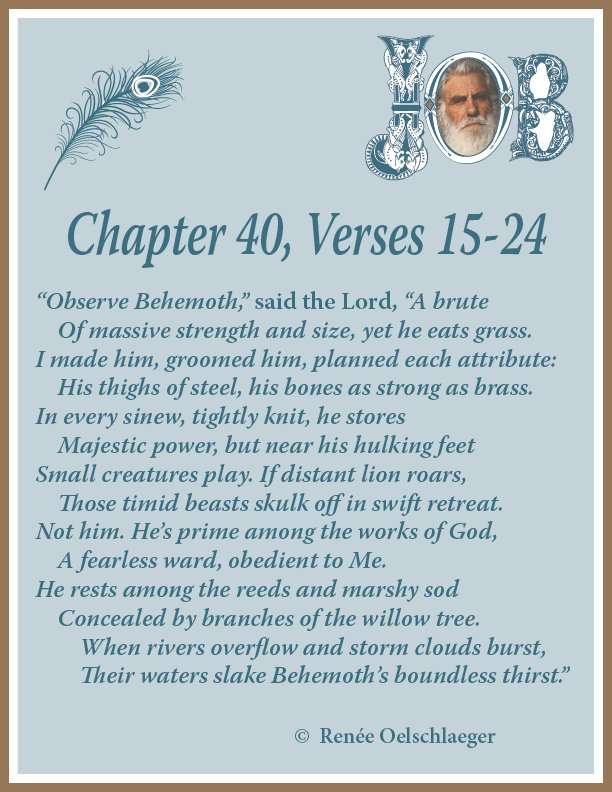