Book five in the Chronicles of Narnia is titled The Horse and His Boy. This volume presents the reader with a vastly different adventure from the previous four books. Action takes place only in the Narnian world, no coming or going back to England. The Pevensies (having appeared in the four previous books) play a minor role here, while the first major character is a child named Shasta.

Three more major characters emerge quickly. First is Bree, a talking war-horse, Aravis, a young girl with status in Calormen, and Hwin, another talking horse (a mare). Almost immediately, one notices a symmetry to the main characters. Shasta rides on Bree and Aravis rides on Hwin. Such two-by-two symmetry persists at every turn.

The book begins with longing. “To Narnia and the North” is an oft-repeated refrain. While doing his chores, Shasta observes that “no one ever went north,” but that’s where he longs to go. Though he can’t articulate it, he has this irrepressible yearning in his soul for the north country. When Shasta meets Bree, (who was Narnian and had been horse-napped to Calormen as a foal) the war-horse reveals his plan to return north. Bree also suggests Shasta’s longing for the north is because the fair-skinned boy (so different from the dark-skinned people of Calormen) has the blood of “true northern stock.”

The unlikely pair make their escape and head north. Later in the tale, when someone accuses Shasta of having stolen a soldier’s horse, Bree claims it is more accurate to say he who has stolen the boy. Hence the title, The Horse and His Boy. 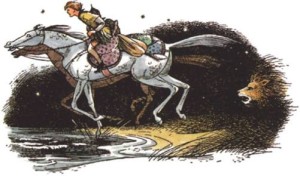 Another example of symmetry that carries throughout the book is the contrast of two peoples, the Narnians and the Calormenes. The descriptions of Calormen lands and people evoke images of a middle-eastern culture:  the men wear turbans and wield scimitars, they rely on disposable slaves for labor, their speech is flowery and amply sprinkled with aphorisms from “the poet” and other purported wise men, and when they speak of their ruler (Tisroc), they add “may he live forever.” The proud Calormenes consider the Narnian people barbarians whose deity (they believe) is “a demon of hideous aspect and irresistible maleficence who appears in the shape of a Lion.” END_OF_DOCUMENT_TOKEN_TO_BE_REPLACED

As The Voyage of the Dawn Treader concludes (see previous post), Lucy, Edmund and Eustace catch a view of a range of mountains so high, they recognize immediately they’re seeing into “Aslan’s country.” When the fourth volume of the Chronicles of Narnia begins, Aslan has summoned Eustace Clarence Scrubb and his schoolmate, Jill Pole, back to a precipice on the edge of those mountains … and into the Lion’s presence. Eustace is only on the mountain momentarily; Jill (who hasn’t previously been to Narnia) must first be instructed by Aslan before she is transported into Narnia.

The Silver Chair introduces us to a Narnian world many years later than when Eustace reluctantly (kicking and screaming actually) joined the sea voyage of the Dawn Treader. Eustace’s initial travels in Narnia have stood him in good stead; though he still has an occasional lapse into self-absorption, even Jill acknowledges Scrubb is “different” than last term. His encounter with the Lion has been transformative.

Once more, Lewis brings his characters in The Silver Chair to a quest, singular and quite specific:  rescuing Prince Rilian, son of Caspian X who has grown quite old since he and Eustace parted in Dawn Treader. Rilian has been missing ten years and all efforts to find him have been for naught. With Caspian’s impending demise, Aslan tasks Eustace and Jill to bring the young prince home. END_OF_DOCUMENT_TOKEN_TO_BE_REPLACED

Throughout Dawn Treader, Lewis uses delightful images of ever-increasing light, both in the world of Narnia and in the character enlightenment that takes place. The ship is sailing east on a quest to find seven Lords, friends of Caspian’s deceased father. (The seven men were sent out beyond the Eastern Seas by the usurper Miraz.) Caspian seeks to determine if they’re still alive or dead. END_OF_DOCUMENT_TOKEN_TO_BE_REPLACED