Tensions are nothing new for New York City. According to History.com, an 1857 NYC squabble (illustrated below) involved two rival police forces. It’s an interesting tidbit from history, don’t you think? 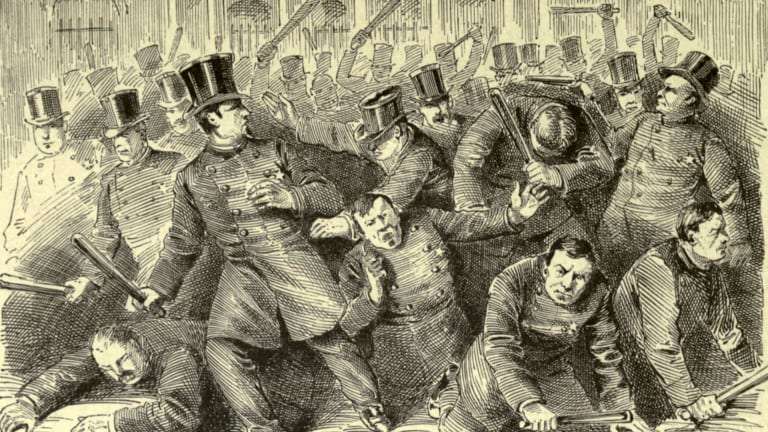 With this long-ago situation a variant of what’s happening today in cities across our country, newscasts have become more tedious by the day. Incidents like this, and this, and this certainly give me pause. What’s next? The whipping post and pillory? It seems intentional humiliation of individuals is now an acceptable power tactic to keep the timid, huddled masses in line. END_OF_DOCUMENT_TOKEN_TO_BE_REPLACED

Almost everyday, it seems there’s a news story − radio, newspaper, television or online − reminding us of another sad tale of a child or children being bullied. Today was no different. I can’t remember the exact details; I tend to tune that stuff out because it doesn’t fall into the man-bites-dog scenario.

But hearing mention of today’s incident got me to thinking about the general reaction that erupts following this kind of “news” story. Permit me to rephrase one of President Ronald Reagan’s wry quotes:  if a kid bullies, give him media coverage / if he keeps bullying, put his story on the front page / if he stops bullying, give him a regular spot on the nightly news.

When I was growing up, there were bullies … but I don’t recall ever hearing about them on the news. As a child, I was taught two things:  (1) how to be kind and loving and (2) how to defend myself when necessary. The point was to live without malice toward others, but if a situation merited physical response, personal defense would be justified.

There’s a story that comes from one of my mom’s Philadelphia relatives. In the late 1920s, the family became aware of a nearby family of “color” living in their neighborhood and it was widely known that the man in that household was bullying his wife, beating her badly. The male members of my mom’s family went to visit this man one night. They told him very clearly that he would stop beating his wife. There was an implied “or else” … but the warning worked, the beatings stopped.

This incident wasn’t racial in any way, just a community policing its own and protecting a vulnerable woman. That’s the way communities often handled sticky situations. (Today, people might condemn such actions as “vigilante violence.”)

In sixth grade, I was a shy new student in a new school. For the first three days of school, I was in one classroom with a sweet female teacher. On the fourth day, the principal moved me to a different classroom − with a whole new set of classmates − and this time, the teacher was a middle-aged man (Mr. S.). Up to that point, I’d never had a male teacher! I was already way out of my element with all the numerous adjustments and now I was thrust into even more turmoil. (To this day, I don’t know why I was moved.)

That same week, I managed to be among the first to climb aboard the school bus after dismissal. I walked all the way to the back of the bus and sat down. Shortly afterwards, another sixth grader (a wiry boy nearly six feet tall) got on the bus and brashly stood in front of me, saying:  “You’re in my seat.”

By that time in my life, I’d been accustomed to riding city buses for a couple years. On a city bus, you choose a seat based on availability; nobody has an assigned seat. (I wasn’t aware of school bus protocol … if such existed.) I told this boy I didn’t plan to move. Fearlessly, I told him I’d arrived first, so this seat belonged to me.

He proceeded to manhandle me and try to physically remove my petite person from the seat. What he didn’t know was my experience with two brothers (one older, one younger) and how prepared I was to carry my own in a wrestling match. In addition, I’m so stubborn that when he manhandled me, his overt act was like throwing fuel onto flame!

We scuffled pretty seriously for about five minutes (or maybe it just seemed like it to me?) while other students looked on in amazement. As I learned later, an unwritten tradition established years earlier ruled that the sixth grade boys owned the back of the bus. Here I was − a girl − challenging that tradition!

In the end, I kept my place. And over time, this boy and I became good friends. I think we both learned something that day. He learned that even a ninety pound female can will herself to become an immovable force, if necessary. I think I learned how to stand my ground (to an extent I’d never had to do with either of my brothers). The lesson has stayed with me over the years, especially when foundational principles were involved.

When this situation took place, I don’t remember thinking I was bullied. It was a significant scuffle (though thankfully, no blood was spilt). Neither school authorities or bus driver (and not even our parents) got involved. We settled the entire episode by ourselves.

The concept we know today as bullying isn’t new. Fictional character The Shadow phrased it this way:  “… what evil lurks in the hearts of men?” But the problem goes back even further; Cain and Abel (the sons of Adam and Eve) experienced conflict that led to the first murder. Jeremiah 17:9 says:

“The heart is more deceitful than all else
And is desperately sick;
Who can understand it?”

We shouldn’t be surprised there are bullies. Given the wickedness of the human heart, it’s a mercy there aren’t more of them in the world. But eradicating the acts perpetrated by bullies? Somehow convincing them their aggressive behavior is unacceptable? I don’t see that happening no matter how many news stories a day are devoted to condemning them. It’s a matter of the heart.