Ah, National Poetry Month 2015. Are you as excited as I am? Actually, I shouldn’t give the wrong impression. I am eager to take part in celebrating poetry, but in all truth, I’m able to do that whether it’s National Poetry Month or not … and so might we all. So, to borrow an expression from racing, Gentlemen, start your engines!

When I began to think about National Poetry Month and the NaPoWriMo 2015 challenge, my thoughts naturally gravitated to one of my favorite poets, the estimable Edgar Allan Poe. Say it with me, P – O – E – T – R – Y ! If ever a man had a perfect name for writing poetry, it is Poe!

END_OF_DOCUMENT_TOKEN_TO_BE_REPLACED

The word of the day is Poe(sy). Stay with me and I’ll explain. But first …

Given that yesterday was Edgar Allan Poe’s birthday (noted in my post here), it should not have been a surprise to me that others might also be marking the occasion by blogging about him. But it was a surprise! After another blogger visited my post, I clicked over to his and found a delightful blog that I’d be remiss not to share with you here. 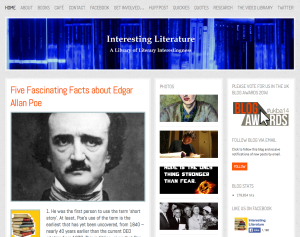 Entitled Five Fascinating Facts About Edgar Allan Poe, the post at interestingliterature.com offers tidbits (in the post as well as in the comments) about the writer and I enjoyed reading these facts. I also recommend a complimentary post (on the same blog) written last July − Edgar Allan Poe:  Poet and Prophet. These are definitely two posts well worth reading for any Poe aficionado!

I enjoyed the Interesting Literature (IL) posts partly because they differed from mine. The factual elements contrasted to my more maternally sympathetic view of Poe. (I may be a poet and writer, but so often, my motherly instincts are digging deeper; as part of delving into the great writer’s work, I want to understand him, the Poe only a mother might know.) It was refreshing to read the IL posts for a completely different approach.

One of the wonders of Edgar Allan Poe’s life (as I inferred in yesterday’s post) is how contradictory some portrayals of this man are. His knock-about, pillar to post instability supports a general impression of wantonness and irresponsibility. By Poe’s own admission, he lived “a very dissipated life” while at the University of Virginia.

Further supporting this view of Poe’s prodigality, Reverend Griswold (author of Poe’s obituary) uses the death announcement to describe Poe as friendless and “brilliant, but erratic …” (These are some of the least brutal comments Griswold offered!) No matter that Poe purportedly entrusted Griswold with his literary estate! Griswold seems to despise Poe’s character and manner.

Were Griswold’s assessments accurate or were they instead meaningfully cruel, reflecting deep-seated resentment and jealousy? Maybe Griswold’s negative portrayal alone accounts for the sour perception of Poe’s public persona, and the good Reverend’s words drove a narrative that eventually became accepted as true? (This may in fact be the case as there were others who disputed Griswold’s characterizations.)

It’s not my place (I am no scholar) to definitively fill in the blanks about the “real” Poe. Nevertheless, I’m drawn to ask what are, to me, pertinent questions. Is Griswold solely at fault for tarnishing Poe’s reputation? Or, did Poe himself nurture these images of dissolution and impoverishment? He was known to prefer a romanticized image of himself. Was Poe seeking to burnish a public perception of himself as a starving artist? Hoping this image would earn him attention and sympathy from generous benefactors?

Personally, I admit I might have been one of his sympathetic and generous benefactors. Even so many years after his death, I want to think the best of him and dismiss any hint of cynicism. My tendency is to adopt a middle ground:  Poe − the fiction writer − might have found a fictionalized version of himself to be quite compatible … and preferable to painful (or painfully dull) reality.

It appears to be factual that an early autobiographical statement written by Poe himself was, shall we say, embellished. Anyone who’s ever written a resumé is tempted to pad the facts. Can we … will we … overlook Poe’s possible ornamentation of facts? Would we perhaps excuse Poe’s padding? Or, should we instead, banish Poe because the stories of his life are so muddled in uncertainty and contradiction?

Were Poe a theologian, purists might condemn him for heresy, that is, “any opinion or belief that is or is thought to be contrary to official or established theory.”

Upon reflection, however, I suggest Poe was simply inventing (as one continuing to write from the grave?) a new definition of Poe(sy), which I would define as “a narrative that may not necessarily comport with facts but is consistent with the overall work of artistic composition.”

May we consider Edgar Allan Poe a thoroughly artistic composition and thus view him through the romanticized lens he preferred?

Today, I mark the two-hundred-fifth birthday of Edgar Allan Poe. As one of the earliest American writers of renown, Poe’s life unfolds a cautionary tale in our general understanding about the struggles and motivation often thought to be required of a writer. In some respects, he epitomized the stereotype of a tortured soul driven to express his passion and loneliness on the printed page.

One might easily understand the angst that seems a significant part of his existence. Born in 1809, his father “disappeared” early (so described in at least one source, while others say the man died … who can say for certain?) and then his mother died, both events occurring before Poe had reached his third birthday.

After Poe became an orphan, he was fortunate to have a well-to-do family (John and Frances Allan) bring him into their home though he was never formally adopted. Like so many relationships in Poe’s life, this one was fraught with grief.  Frances Allan died when the lad was barely twenty. Poe’s relationship with John Allan had serious ups and downs. The foster father provided funding for Poe’s top-notch early education, but there were often clashes and estrangement resulted. Gambling debts and instability were major points of contention between the two. END_OF_DOCUMENT_TOKEN_TO_BE_REPLACED