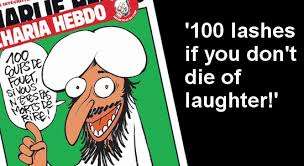 Oh, I get it. This walking on eggshells is because lots of unspecified other people (with their unspecified “variety of causes“) want to kill us. Perfectly clear. Should we just cede now that being liked by everyone is our chief goal? Close up the State Department offices. Close up the White House and Congress. Maybe Joel Osteen (with his feel-good, positive message) would step up and get all the various world parties together for a group hug? END_OF_DOCUMENT_TOKEN_TO_BE_REPLACED