The religion of Islam permits a man to divorce his wife through the thrice-repeated pronouncement of ṭalāq. 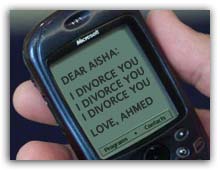 Many American taxpayers find themselves in the untenable position of doing what they consider to be “right” (paying their taxes) and “wrong” (funding government’s irresponsible and socialist practices). Recall the pre-Revolution complaint “No Taxation Without Representation!” It was one basis for our Declaration of Independence. The concept is as relevant today.

What does the Bible teach? Is it biblical for a Christian to opt-out “for conscience’ sake” (Romans 13:5) ?

Aside:  I ran across a Tweet and its blog rebuttal betwixt my two adult daughters. My (unsolicited!) contribution demanded more than 140 characters but elder daughter’s blog comments were disabled; thus my post here. Elder daughter’s first post (with younger daughter’s Tweet prominent) and a companion post are thought-provoking (recommended) reading.

Second Aside:  Comments about same-sex marriage (which prompted the original Tweet/blog exchange) are reserved for another occasion.

Third Aside:  If my comments here seem lop-sided, it’s only because elder daughter provided posts while younger daughter opined in a single Tweet.

… Enough disclaimers! Elder daughter’s post Married to Government makes many points with which I agree. I won’t address the Erick Erickson column, except to note I concur how laughable it is to employ euphemism (gay marriage vs. civil unions), the “mental gymnastics” that only promotes cognitive dissonance. Ugh!

So, let’s do as elder daughter proposes:  reconsider Romans 13. By titling this post Divorced From Government, my hope is to draw balanced parallels between my elder daughter’s post and my own. She argues that many Christians blindly affirm the belief that Romans 13 dictates robotic fealty to government. She challenges this autopilot mindset.

For my part, I agree with her critique! Any Scripture passage viewed in isolation makes possible a myriad of errors. It’s appropriate to question how one may judiciously weigh Romans 13 (Paul’s treatise) against Peter’s Acts 5:29 declaration, “We will obey God rather than men.” Do Peter’s words contradict Paul’s?

Fourth Aside:  My elder daughter describes Romans 13 as “the favorite Bible passage of would-be tyrants” − a debatable charge (in my view). Seldom have tyrants (would-be or otherwise) sought or needed Scripture’s imprimatur to justify their misdeeds. But I quibble.

Elder daughter supplies a compelling list of saints who stood firmly against oppressive rule. These saints keenly remind us of God’s infinite grace in the midst of grievous circumstances. However, if we focus only on their choice to obey God, we ignore the “parade of believers” who were subject to the tyrant’s brutal whim.

Having celebrated earlier this month the Resurrection of Christ, I reflect how unlike Peter (in Acts 5) Jesus was. In fact, when the soldiers came to seize Jesus, this same Acts 5 Peter drew his sword and cut off the ear of a slave. The Son of Man instantly admonished Peter:  “Put your sword away! Shall I not drink the cup the Father has given me?” (NIV)

Peter’s instinct was to wield his sword against an unjust arrest. Yet, in remarkable contrast, Jesus’ mission from the Father enabled him to surrender Himself to the soldiers. Neither man’s actions belie the truth of Romans 13 (that “there is no authority except that which God has established” NIV) nor, in my view, would either man’s actions condemn the other’s. They were both intent on fulfilling the Father’s will in their lives.

My elder daughter observes:  “Most governments FAIL God’s standard ….” (She’s usually more circumspect about all or nothing statements than I am.) Still, I think she’d actually agree with my contention that ALL governments inevitably and repeatedly fail God’s standard.

So let’s return this discussion to April 15, 2013, and as elder daughter maintains, we must choose as did the Founders. When it comes to government diktat (in this instance, the payment of one’s income taxes), we each determine whether and when to prudently submit or stand in defiance. Neither action represents a superior position, but rather the call of God in an individual’s life.

May I humbly suggest that viewing the “witness of Scripture as a whole” requires balance wherein both submitting and standing in defiance must be compatible.

Men like Daniel are rare, but when our commitment is to serve the Lord, we know with confidence that we’re in His hands “to will and to work for His good pleasure.” (Philippians 2:13) The ultimate outcome belongs to Him.

The Founding Fathers established the Electoral College (EC) to resolve an unfair advantage the more populous states enjoyed over rural (sparsely populated) states in the Union. Electing a president based on electors (rather than popular vote) allowed a slightly greater voice for the small states. The framers considered this an appropriate trade-off to protect minority states from the majority.

Article II, Section I of the Constitution instructed each state legislature to determine how their electors are appointed. If not for the EC, four states (Pennsylvania, Massachusetts, Virginia and New York) could have easily overruled the smaller states on every issue.

Here’s the rub. The Massachusetts legislature has enacted a bill this week to bypass the EC, favoring instead the award of all their electoral votes to whoever wins the national popular vote. Yes, even if that candidate did not win the majority of Massachusetts votes.

Five additional states (Hawaii, Illinois, Maryland, New Jersey and Washington) have previously approved legislation similar to what Massachusetts adopted. For an individual to be elected president, he/she needs at least 270 electoral votes. These six states have a total of 73 electoral votes (27% of the number required). END_OF_DOCUMENT_TOKEN_TO_BE_REPLACED