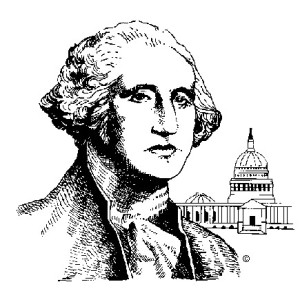 If you went to the Post Office today and were greeted by a shuttered window, you learned the hard way today is officially celebrated as Washington’s Birthday thanks to the 1968 adoption of the Uniform Monday Holiday Act, first effective in 1971. This act essentially standardized federal holidays to conform to Monday-only status (enabling three-day weekends).

The day is generally known and recognized by many states as Presidents’ Day. (When you search Wikipedia for the term Presidents’ Day, you’re redirected to the Washington’s Birthday entry.) Some states deem this day a dual holiday, celebrating the births of both Washington and Lincoln. The crazy thing is neither man’s birthday falls on this day, the 17th! Washington’s birthdate is February 22nd, while Lincoln’s is February 12th.

Here in my home state of Arkansas, in addition to its George Washington birthday status, the day is also set aside to commemorate Daisy Gatson Bates, a civil rights activist involved in the 1957 Little Rock integration efforts at Central High School.

Ah, now maybe I didn’t sleep well last night … I don’t know but I’m feeling cranky. My tendency is to think this “day” being set aside is another irritating symptom of weightier issues.

Certainly, as a federal holiday, lots of people enjoy this paid day off and they do so … on the taxpayer’s dime. Those of us who don’t have paid days away from jobs might have a hard time justifying our compulsory generosity. (I recall the US carrying some $17 trillion in debt. How much does each federal holiday cost us?)

Yes, I’m aware this Presidents’ Day is just intended as an observance which means I’m free to commemorate the actual birthdays if I choose and as I see fit. And yes, I understand the Congress − in its creation of the Uniform Monday Holiday Act − was simply trying to introduce some efficiency and uniformity into government operations.

ASIDE:  Did I actually write that? Using the words Congress and efficiency in the same sentence? Did anyone else trip over that sentence?

But ignore the costs of “shutting down government” (wasn’t that considered an objectionable thing just last fall?) for this or other federal holidays! Who among us believes that making a holiday for all Presidents … or even some Presidents truly honors them all? In my view, designating one day to honor all dilutes the honor they are due! It’s akin to deciding as a family to incorporate all birthdays into one celebration … yuck! Nobody feels special or appreciated then!

I also have something of a bone to pick with my own state. While I have nothing against honoring Daisy Gatson Bates, I’m bewildered that the date chosen to honor her coincides with Washington’s birthday. There are designated days for memorializing other Arkansas notables, but this one − coupled as it is with our first President’s birthday − puzzles me as a combination. Did the legislators simply pull a date out of a hat?

(If you happen to know the background for this choice, dating from 2001 I think, please let me know!)

I have already acknowledged Abraham Lincoln on this blog here. When our first President’s birthday actually occurs, I expect I’ll have a post about him as well. But my natural contrariness causes me to reject this day, this so-called Presidents’ Day for many reasons beyond what I’ve already mentioned.

As an example of how the silliness of Presidents’ Day has proliferated, today’s local news teased its opening by declaring:  It’s Presidents’ Day! And the day wouldn’t be complete without a trip to the Clinton House Museum!

Indeed, I must rush along now! I think the place is only open until 5 p.m.

Today is Abraham Lincoln‘s birthday, our sixteenth President. Born in 1809, he is renowned as the first elected Republican president (though he was previously a Whig for about twenty years). The Republican Party was founded in March of 1854.

My elder daughter and I have had an ongoing debate over the last ten years about Lincoln. She does not admire him; I have always held him in high respect.

As a child, of course, I learned about Lincoln in school. Growing up in St. Louis, Springfield wasn’t that far away (just over 100 miles) and the surrounding area still has Lincoln memorabilia and monuments scattered far and wide.

In my teens, historical fiction was my favorite reading material. I must have read Love Is Eternal by Irving Stone at least two or three times, maybe more. This book tells the story of Mary Todd and Abe Lincoln.

Stone offers interesting and well-researched scenarios depicting the differences between these two individuals and helps the reader understand what a difficult relationship the couple had. It’s a sympathetic look. (The book was written in 1954 − long before Lincoln detractors like Thomas DiLorenzo had constructed an alternate view.)

A more recent book (more recent than Stone’s or DiLorenzo’s) that discusses Lincoln is the 2007 book by Andrew Ferguson, Land Of Lincoln, Adventures in Abe’s America. Ferguson’s book takes the reader on a journey not just through the land of Lincoln (i.e. the places he lived or to which he had some connection at various periods of his life). The journey also tracks down the multitude of stories and mythology related to old Abe. 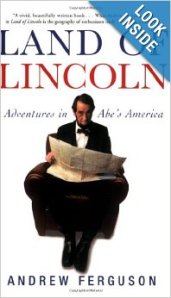 Ferguson also offers some feedback on how his view of Lincoln contrasts from DiLorenzo’s. Apparently, since the release of Ferguson’s book, there may have been some debates between the two men about their differing viewpoints. (I’m still trying to track that down. They may have been interviewed separately and just critiqued the other’s positions on Lincoln.)

I recommend the Ferguson book. The journey of discovery he brings to the pages is amusing, insightful and an excellent example of sorting the truth from the fiction when it comes to all the stories that have proliferated about Lincoln.

As I view Lincoln today, I continue to think of him with respect. When I read Irving Stone’s book (so long ago), my recollection is Stone didn’t paint an idealized picture of Lincoln; Stone’s presentation reflected a far from perfect man. Did he have qualities to admire? Absolutely. I have always admired Lincoln’s determination to educate himself.

But in assessing Lincoln, I acknowledge he was a man subject to the foibles and concerns of everyday people. As President, he had challenges and decisions that were monumental. He didn’t always make the right decisions. What President does? I would not have wanted his job, but I believe Lincoln, like Esther in the Old Testament, played a pivotal role in a trying time for our nation.