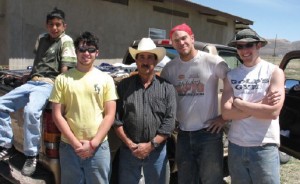 Looking for a post about silence? Allow me to explain about an unabated, extended silence … nearing its eighth year.

First, let me introduce to you a twenty-something young man (first guy on the right, in this 2005 picture at left), seemingly happy and carefree, attending (at that time) a nearby university. The photo shows him on Spring Break that year, spending the week in Mexico working on a building construction crew for a church there. Over a period from 2000 to 2005, he devoted five Spring Breaks with the Mission to Mexico trips sponsored through our church. 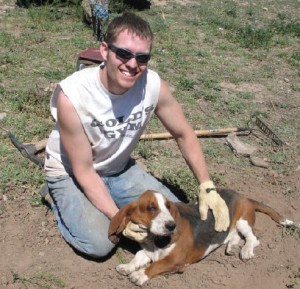 The picture at right shows his sweet smile and gentle nature. We knew him as a big-hearted guy the photo reflects, someone well-loved by peers, tender to animals, and eager to help with tasks set before him.

We also knew him as an earnest family-oriented man. A single man, he exhibited the kind of relational devotion one would hope to observe with a soon-to-be father. At the news of a nephew’s birth, he cleared what remained on his school and work schedule that same day and promptly traveled two hours to personally welcome this baby boy into the world. Think I’m kidding? Look at the two of them below, a photo taken in the hospital. 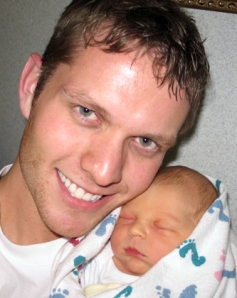 That was May 2005. Things hadn’t yet deteriorated. As the youngest of my four offspring, he probably enjoyed the most freedom … and sooner than his older siblings. (On that point, his siblings agree!)

Through his years as a student, he’d worked hard after classes to fund his education expenses without incurring debt. Living at home was another cost-cutting measure he’d chosen. The prospect of graduating college without debt appealed to him.

But summer of 2005, he moved into an apartment, and though continuing to work, decided to seek a student loan to cover his senior year school bills. 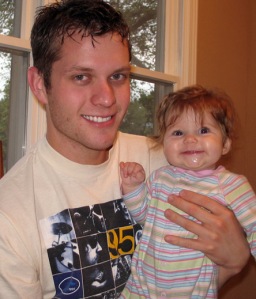 There was, as one might predict, a woman influencing his decisions … no, not the little gal in this picture with him to the right. (That’s his Texas-born niece, a picture also taken in 2005.)

Yet, he was advised by a woman, someone just five or six years younger than me (his mother!). Over the next several months, he maintained (in frequent conversations with his daddy and me) the relationship wasn’t serious and would have no long-term place in his future. What we observed (even then) failed to support his assertions.

I won’t drag this out with blow-by-blow details. Suffice it to say, this sad story of estrangement and silence has an end that remains unknown to us. I’ve made references to my ongoing grief in other posts (here, here, and most recently, here). Like most families, whenever we get together (the other three adult children and their families still seem to appreciate their parents’ company), we laugh and love and sometimes cry … just as we’ve always done … but in the midst of family times, there’s always a palpable void. We are un-whole.

There was no formal cutting of ties; one day, he just never returned. On his next-to-last visit, he told me:  I was never happy in my childhood. I was stunned of course. I made a personal pilgrimage through all the family photos to see if the facts upheld his statement. I found the exact opposite, a happy-go-lucky child, ebullient, zestful.

Oh, I was never the best mom on the block … never claimed to be. When I think back on my days mothering four, I think with wonder how delightful they were … but I’m most apt to recall my own personal failures. With my youngest (the subject of this post), I remember his shyness in childhood. Was I such a tower of overbearing bluster to have caused his reserve? I know I was a yeller − shame on me! I remember doing our home education, trying to teach him fifth or sixth grade math (not a subject I enjoy). Often, we both ended the lesson in exasperation.

One of the last times I saw him, he came home to return (unopened) a birthday card I’d mailed to his apartment. Before he opened the card (it was a short book and cd), he wanted me to warrant the envelope contents wouldn’t upset him. I couldn’t do that, so I responded by tossing the card/package in the trash. I promised him that day I would not contact him again; the next move would have to be his. (I’ve broken that promise once by texting him when his granddaddy died in 2008. He skipped the funeral anyway.)

A couple years ago, my Beloved phoned our son (around Christmas time) hoping to set a meeting for coffee. Our son asked one question: Have you changed your attitude about B, the woman with whom he presumably lives … or lived? The phone call ended with a quick rebuff after my husband replied, no, it hasn’t.

Two days from now, our family will mark this young man’s thirty-second birthday. As always, we will pray for him. We will long for his fellowship. We will wait in regretful silence as the years roll slowly along.

What do I know about silence? I know I would rather be beaten to a bloody pulp than endure one more day with a crucial part of my heart missing. But I will not wallow in self-pity. For as long as it takes, I will muddle through the silence because I must. Nor would I ask anyone else to pity me.

There are worse silences than the one I carry; I posted yesterday about an extreme torment I thankfully have not endured. It would be a grave affront for me to compare my burden of silence to what that family suffers. I wouldn’t dare.