When I started this blog, one of the things I promised was an occasional “peculiar” post. I haven’t had many of this variety because I’ve realized things that seem peculiar to me may be considered mundane by others. Today’s post (with its tongue-in-cheek sonnet) may in fact be one of those. 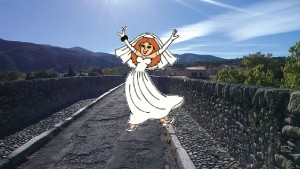 When I first saw this story, I ignored it. The world is full of seemingly insane people doing seemingly insane things. I already acknowledge I can be a little nutty, but who am I to suggest other people are as well?

But after some reflection, I returned to the story. My sense of humor tends to be perverse, and all I could do was per-versify. I must admit my sheepishness before I convinced myself to actually post the sonnet below; it feels almost irreverent (at least to me) to have created a sonnet about something so absurd!

In my defense, however, I defer to Clement Wood whose 1936 The Complete Rhyming Dictionary and Poet’s Craft Book has long been something of a Bible for me. Wood defines poetry in this way:  “Poetry is the expression of thoughts which awake the higher and nobler emotions or their opposites, in words arranged according to some accepted convention.”

While the sonnet herein is unlikely to awaken “higher and nobler emotions,” I suspect it may arouse the opposite feelings. Throughout his discussion of poetry in the Rhyming Dictionary, Wood grants that the craft of poetry has dramatically changed through the centuries. Where themes are concerned, Wood concludes:  “the Verboten sign is unknown to the present generations of poets ….”

Language isn’t set in stone; neither is poetry. Standard forms of poetry don’t veer too far off-course, but today’s poetic themes will likely reflect the prevailing Zeitgeist, whether it’s post-modern, trans-modern or post-post-modern or some other school of thought.

So I give you my less than profound take on the woman who (back in July) “married” a bridge. And, as if this isn’t silly enough in and of itself, tomorrow I’ll post another tongue-in-cheek sonnet as a follow-up.

2 thoughts on “The Bridge Possessed”