As a bit of review, I’ve progressed to Job Chapter 36 in this weekly study. So far, The Book of Job has provided a bird’s eye view of what’s going on (1) in the celestial arena hidden from human view in the early chapters, (2) what happens to Job and how he responds to horrible suffering, and (3) what Job’s friends think might be the explanation for his suffering.

The young observer Elihu has listened to Job’s friends offer their explanations. He’s also listened to Job’s bitter response to his friends’ comments. Beginning with chapter 33, Elihu presents a rational discourse to which the others have no response. In chapter 36, Elihu presses on, refuting certain things Job suggested.

For instance, in chapter 21, verse 7, Job complained, “Why do the wicked live, reach old age, and grow mighty in power?“ In other words, Job thinks the wicked live long and don’t suffer … but he, a man who has honored God and been faithful, is thrown into a situation of intense suffering. The contrast between Job and “the wicked” presents a valid argument that God is unfair.

Elihu further explains God’s active attention to His creation – not because He’s obligated to watch the righteous, but because He desires to bless and dote on His creatures. In previous chapters, Job has daringly challenged the Almighty as if He were a human adversary in court. Elihu reminds Job (verses 22 and 23) that God’s the greatest teacher of all and no one can justifiably accuse Him of wrongdoing. It’s not in His character.

In verses 27 to 33, Elihu draws a word picture of God’s power in the heavens. All that He does, sending the rains, thunder, lightning, and spreading out clouds are evidences of the vast power of the Creator. With today’s sonnet, the fourteen lines unfortunately didn’t permit me to include Elihu’s word picture.

This sonnet focuses on the first 26 verses of the chapter. Elihu is urging Job to rethink his attitude toward the Creator. Since Job believes God is “unjust” to allow Job’s suffering, Elihu asserts Job has yet to understand the true nature of the Almighty. 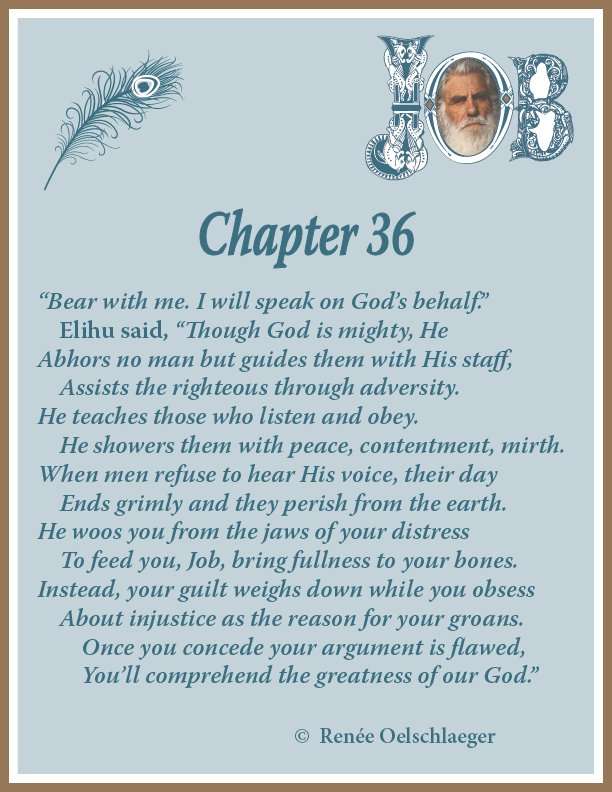