The biblical patriarch Job expresses similar inclinations in Job chapter 24. The chapter begins with Job asking another penetrating question:  why doesn’t the Almighty set certain specific days for judgment? I think he asks this question in part because he believes people want to know and be assured that evil actors are receiving retribution for their wickedness! If God would set aside the first day of each month to mete out judgment on evildoers, the rest of us could at least have satisfaction knowing it’s been done.

To Job’s disappointment (and ours), God doesn’t work as we wish He did. In fact, throughout chapter 24, Job points out how the wicked people he’s observed do pretty much what they want, and often it seems, without consequences for their evil acts. It’s the poor man who seldom has a decent break, Job says. He works for The Man and gains little benefit for his labor while The Man enjoys leisure, enrichment and enlarged territory.

In an interesting way, Job’s accusations parallel some of the complaints common in our 21st century. Savvy politicians often rely on the rich vs. poor meme as an appeal for votes. The #Occupy crowd utilized the slogan We Are the 99% as a way to differentiate their level of wealth (or poverty, they might suggest) from the ultra-wealth belonging to the remaining 1%.

Yes, Job had been a wealthy man and was suddenly stripped of his wealth. But I don’t think Job would have been comfortable with the 99% vs. 1% distinction. In chapter 24, he is simply observing life and the world the way it is … to borrow from the vernacular:  it is what it is. The reality Job sees around him is a world where some people have plenty (regardless of their goodness or wickedness) and others get by with much less. Job didn’t live in a world where everything was equal.

Nor do we. In Job’s world (as in ours) God allows the sun to rise and the rains to fall (as one example) on the just as well as on the unjust. (Matthew 5:45) This is God’s common grace bestowed on His creation. And even though we are beneficiaries of God’s common grace, we sometimes have a difficult time reconciling the notion that God allows terribly evil people to succeed, to flourish beyond reasonability! We want them punished!

It’s easy to identify with Job’s mindset in chapter 24. Inequity and unfairness riled Job. The sonnet below expresses some of Job’s frustrations … in essence, he’s saying, if he were the god of the universe, he’d do things differently from the Almighty’s ways. I’ve been there lots of times and must remind myself that it’s best for me to let God be God. He’s already got things under control. 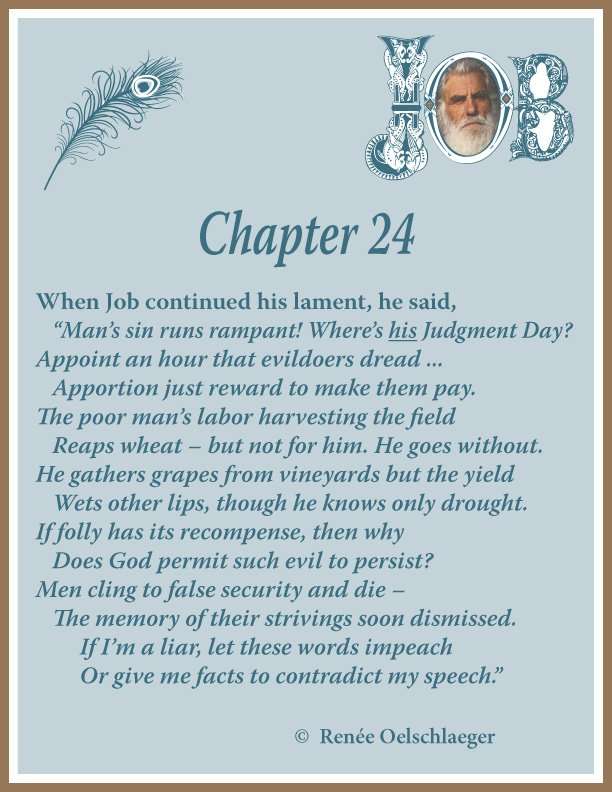 3 thoughts on “The Just and the Unjust”