Okay, we’re digging deep here with The Mission … a 1986 film? Were there no available flicks from the modern era? This is a “Special Edition” of the remarkable film. It’s long (125 minutes without the Bonus Material DVD), but the cinematography is superb, and with its historically-based plot and another Ennio Morricone score, I enjoyed the movie!

The film has its weaknesses. Initially, two stories are presented in point/counterpoint. There’s Father Gabriel, the saintly priest played by Jeremy Irons. There’s Rodrigo Mendoza, the mercenary and “sinner” played by Robert DeNiro.

For my part, I wanted to care deeply for these men, but except for the scenes where each man is tested physically (and you briefly sense their passion), the story advances too quickly. (It must! The clash of civilizations awaits!)

As a slice of mid-18th century history, the film provides a backdrop of politics and religion run amok (not so different than today, I mused). Father Gabriel and acolyte Mendoza focus on their mission, to establish caring relationships with an indigenous people group (the Guarani), to teach the people to work and live harmoniously and to worship God.

But Portugal and Spain, in league with the Vatican, have other ideas that require abandoning and utterly destroying the established mission post the Guarani view as their home. When the tribe refuses to leave, they’re massacred, men, women and children alike; a few belatedly flee to the forests.

I don’t know how accurately this movie depicted the history. I suspect the film is truthful, perhaps understating what is documented. But throughout the film, I kept recalling a more recent film, also historically-based, also presenting the story of another South American indigenous tribe:  End of the Spear from 2005. 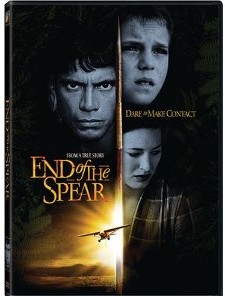 This story revolves around the Waodani (aka Waorani or Auca) tribe, but this time, it’s the native tribe who massacres five American Christian missionaries.

I was a little girl in 1956 when the missionaries were killed. I remember my parents talking about it. Life Magazine ran an extensive article on the tragedy.

Ordinarily, I don’t spend time thinking about ifs and buts. The God whom I serve is sovereign and I’m confident He works His will in our world, not whimsically, but with love for His children.

Still, reflecting on The Mission, I couldn’t help but wonder:  if the political powers exerting their whim in 1750 had allowed the Guarani people and the Mission to remain, might Father Gabriel’s evangelistic work have flourished, spreading to other indigenous tribes throughout that remote region? Had the 1750 massacre never happened, might the 1956 massacre have been avoided?

Useless speculation, I know. God holds the future in His hands, and thankfully, He doesn’t make mistakes. I am blessed to be His child.