Happy Birthday, Susan B. Anthony! Born on February 15, 1820, Anthony worked tirelessly throughout her life (she died in 1906) for the values she held most dear. Born into a Quaker family, she inherited from her parents an acute appreciation for the dignity of every human being.

Information about Anthony’s life and work is widely available online, so rather than rehash those details, I thought I’d highlight other tidbits I have enjoyed by studying her. (Any serious student of Anthony’s will likely appreciate the two-volume work written in 1899 by Ida Husted Harper and available for download from Project Gutenberg.)

Biographical information reflects Anthony was a hard worker, a self-starter who from her youngest years applied herself to study and serving the needs of her family. In their young years, Susan and her sisters cooked and carried food to their father’s hired factory hands. Later, when her family experienced severe economic downturn, Susan set herself to help pay off her father’s debts.

The elder Anthony’s views on intemperance made a lasting impression on his children, including Susan. When hired hands were “ill” from spending too much time at the tavern, Susan was paid to do their job. Her father organized a temperance group and in his business dealings, Anthony also opposed slavery to the extent he would not purchase products made with slave labor.

These moral choices certainly informed Susan B. Anthony’s life. An interesting incident occurred when Susan attended school where the male teacher didn’t care to teach a girl long division. Susan’s father subsequently brought her home for her education (including long division). Such early experiences − and her parents’ willingness to open doors rather than close them − gave Susan an excellent foundation to understand and embrace the inherent dignity of humanity, regardless of gender or skin color.

Eventually, Susan’s passions for abolition, suffrage and temperance flowered into active agitation. In the early 1850s, having met both Frederick Douglass and Elizabeth Cady Stanton as well as other notables, Susan began to participate in the struggle for suffrage. This would lead to the November election of 1872 in which she and more than a dozen other women walked into the Rochester, New York polling location and boldly cast their votes. (In addition, 1872 was the first time women were officially recognized in a major party platform, receiving the nod from the Republican Party.)

Anthony was, of course, arrested and tried for her “illegal” vote and a kangaroo court convicted her. With characteristic vigor, Anthony held her ground, refusing to pay the imposed fine ($100 plus costs) and she was never sent to jail despite her refusal to pay. Further, she promised the judge she would continue to violate the law in order to one day have justice. Pursuing what was right, Anthony learned to be fearless!

ASIDE:  I’ve chosen in this post not to worry over the ongoing argument that a contemporary Susan B. Anthony would be pro-life or support abortion rights. My personal view is her sense of human dignity (no matter one’s location or status) reveals a deep-seated distaste for willful destruction of life, but I’ll leave the particulars of that argument to others.

An outstanding aspect of Susan B. Anthony’s life was her friendship with Elizabeth Cady Stanton. I absolutely love the heartfelt sentiment and love expressed (written in verse!) in this eightieth birthday greeting from Stanton to Anthony! (Original images found here.) To me, this is a poignant message, especially because both women were well advanced in years. Stanton died less than three years after this birthday greeting. 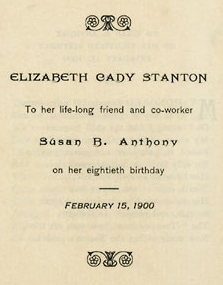 Two lifelong friends … joined not just by their efforts toward universal suffrage but by their love for one another. Neither of them would live to experience the fulfillment of the blessings of liberty they’d envisioned, but they were confident it would happen. And it did with passage of the Nineteenth Amendment.

One thought on “The Quaker Saint”