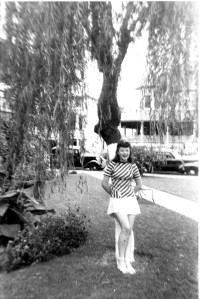 For as long as I can remember, I’ve loved hearing about how my parents met and the various details related to their war-time courtship. In a battered box in their closet, Mom once kept a stack of letters Daddy had written to her during his service in Europe in World War II.

Whenever I got the chance, I’d snatch one or two letters from that box and steal away to my own room to read them. (They were only slightly romantic, just accounts of news and whatever drama his friends were experiencing.) Of course, every letter had to first pass through the censor’s oversight before it could be posted!

Sadly for their offspring, those letters are gone now. In the days after my dad knew death would likely come within the year, he and Mom walked out to the beach near their home, sat down and re-read the letters one final time before dropping them into a campfire. I know they chose what to do with the letters; but I’ll always be disappointed that part of their legacy went up in smoke.

Near Mom’s 80th birthday, I asked her to write down the story of meeting Dad. (She still had her sight then.) I turned her recollections into a memory book prior to the surprise birthday celebration we threw for her with many family members gathered in her honor. (See more about that celebration here.) The story of their first meeting is funny and I share it below (the first of two parts with part two posting tomorrow). This is the story … in her own words.

It all started with a lie; not a whopper of a lie and I know it’s wrong to lie. Still, when Abraham lied to Pharaoh about Sarah, God used it for good, and I believe He did the same in this case.

During World War II, I was working for the Navy at the Naval Supply Depot. Though there were hundreds of sailors and officers working there, it was over-populated with young, middle and old women. A military post was the only place where men were to be seen because the civilian population had been decimated by the draft and the war.

Every couple of months notices were posted on the “Bull Horn” announcing a dance at some military post. Women who wished to attend signed up. The purpose of these dances was to boost the morale of the servicemen by our being with them, playing ping pong, pool, talking and dancing. Though my friend Lillian and I had never been to one of the dances, we signed up to go. It was to be our first time attending and my last.

After work we boarded the buses and headed to Ft. Dix, N.J. On arrival we were greeted by a sea of khaki (there were soldiers everywhere) and we were soon whirled away.

I was having so much fun that time flew! Before I knew it, word was going around to “Get your coat!” “Time to leave!” “Meet at the bus!” “Hurry!” But I was in no hurry. I decided to get a few more bugs in my jitter until suddenly I realized the hall had gotten very quiet and nearly empty of females.

Rushing to get my coat and yelling “I have to go!” I rushed out hoping to get to the bus door before the last person did, but wouldn’t you know I was THAT last person. Standing at the door was “Chappie” (the chaperone), a clipboard in hand with our names on it. She began lecturing me, a lecture everyone on the bus could hear!

“Where have you been?” “Didn’t you hear the call to leave?” “You’re a selfish girl, Ruthe West, making us all wait for you. Since you don’t obey the rules, you won’t be attending any more dances. I’ll see to THAT! I won’t forget who you are!”

Well, finding the last empty seat on the bus, I thought, “Who cares?” I’d had fun. But I decided if I had to endure this unpleasant woman as a chaperone, I’d rather stay home in the future. I put my head back and dozed, giving it no further thought.

Several months later I spied another big announcement on the “Bull Horn.” 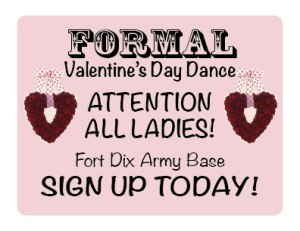 Wouldn’t that be fun? I thought. I just had to go!!! I could imagine a formal event!! An evening gown, evening shoes, gloves, bag and all that glamour stuff that had been stored away since the war started. But how could I?  I wouldn’t be allowed to go; I had been blacklisted.

What could I do? Day and night that’s all I thought about but there was no one to give me some advice. I certainly couldn’t talk to my Mother! She had no idea I’d been disciplined, so there was only me, myself, and I had to come up with some ideas.

As the date got closer, I was beginning to think I’d just have to be content sitting at home, listening to “Make Believe Ballroom Time.” But the desire to attend the dance had taken root and grown in my mind, much too late to pull it out. One day while on coffee break, the idea hit me between the eyes:  I would go incognito!

But who could I go as? I only knew one person who had attended the dances in the past. Trouble was I knew her only casually, just ‘nuf to say “Hello” to. She would be perfect!!!!  Anyway she shouldn’t be going to dances. She should be the one listening to “Make Believe” and writing letters to her sailor hubby who was stationed in the Pacific. At least, this is what I reasoned. From that moment, I knew I would go as BOBBIE PRINGLE.

Please come back tomorrow to read the conclusion of The Tale of Bobbie Pringle, Part II.

3 thoughts on “The Tale of Bobbie Pringle, Part I”