There are many stories from mythology that fascinate me. Ovid’s tale of Echo and Narcissus is one. (And part of my fascination with such tales is due in part to the intricate historic images that have been painted to portray the stories.)

This tale captures my imagination! There’s unrequited love, there’s an overbearing (though beautiful) woman (nymph actually) always getting the last word in, there’s the handsome young man who spurns a maid’s bold overture of love. And there’s cruelty, the cruelty of Nemesis agreeing Narcissus should be entrapped in his own foolishness, as well as the cruelty that results when Narcissus experiences the disappointment of unrequited love (because he has “fallen in love” with his own image in a pool).

The dictionary defines narcissism as “inordinate fascination with oneself, excessive self-love, vanity …” Know anyone who fits that description? I think it kind of describes today’s culture.

For Narcissus though, there was at least one redeeming element:  when he died (and disappeared), the nymphs had hoped to bury him, but his body couldn’t be found. Where he’d lain, they found a flower, purple within, and surrounded with white petals. Today, this flower (now apparently in colors other than white) bears the name and preserves the memory of Narcissus. It’s a medicinal flower (see the root narc in it?) and is considered by some to be a “flower of death.” Beautiful … but deadly. 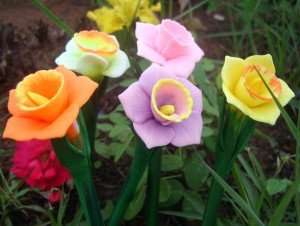 One thought on “This Thing Called Love”