Remember the old taunt from childhood? It went something like this:  Bobby and Judy, sitting in a tree. K-I-S-S-I-N-G. First comes love, then comes marriage, then comes Judy with a baby carriage. I don’t know where this taunt originated, but I’m certain I’m not the only one who taunted friends or siblings with that childish mockery. I remember singing those words in typical sing-song fashion whenever one of our inner circle felt the first twitterpations characterized by puppy love.

As a child, I always wondered about that sitting in a tree part. I puzzled over it. From my child’s perspective, I thought perhaps when people are in love, maybe it’s natural or expected for them to climb trees? Perhaps there’s something embarrassing or shameful about expressing their love in any other way? Or, maybe the jingle was just designed for its rhyme. It might have been that simple.

Generally, children climb trees. By the time we’ve reached adulthood, most of us have given up climbing … except for the occasional hike or weekend campout. We might enjoy a climbing wall or rock climbing challenges; many of us climb stairs regularly. But climbing trees is an activity we associate with children. Think with me, for a couple minutes, about an individual known for tree climbing …

A week ago, my post related an incident that took place while I was seated in church. I was reminded of that post today … as I again sat in church. The text was Luke 19:1-10 where Luke the physician narrates an encounter between Jesus and a chief tax collector named Zacchaeus. Maybe you’ll recall Zacchaeus from children’s Bible stories? Maybe you even remember the song: Zacchaeus was a wee little man, a wee little man was he. He climbed into a sycamore tree for the Lord he wanted to see. There’s more to it if you want to view the YouTube video. 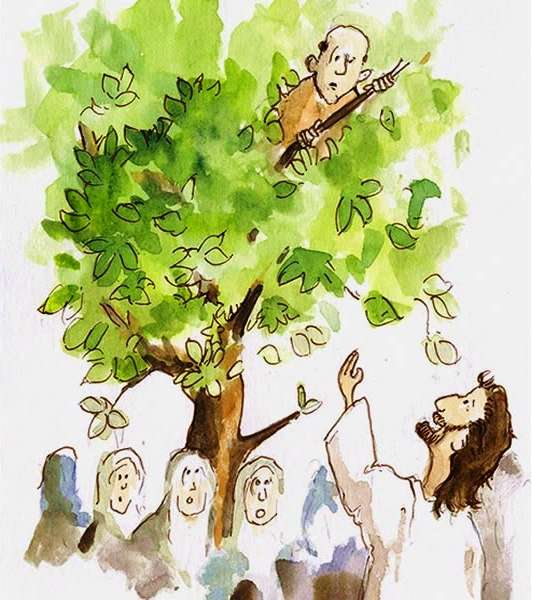 In the town (Jericho) where Zacchaeus lived, it’s likely he experienced a level of marginalization due to his tax collecting job. His job was to collect taxes for the Roman governor. Not only was he a tax collector, he was doing it for the benefit of the Roman occupiers!

Because of his position, Zacchaeus became a wealthy man. Tax collectors of that time were apparently allowed (maybe even expected) to enrich themselves by skimming a portion of the taxes they collected. Everyone in town knew that’s how Zacchaeus got rich and they didn’t like him much for it.

Today, it’s almost natural to have a negative attitude toward the IRS, our modern (and much farther removed) version of the chief tax collector from biblical times. Mention the name Lois Lerner and visions of destroyed hard drives and lost emails come to mind. Zacchaeus didn’t have computers at his disposal, but among his neighbors in Jericho, he would have been a social outcast.

When he heard Jesus was coming to town, though, he wanted to see this man who’d made water into wine! Zacchaeus needed a perch where he’d be able to see Jesus without other people blocking his view.

You see, Zacchaeus was small in stature.

I know about small stature. In fact, my vantage point in church today was blocked by a couple of very tall people standing in the row in front of me. I couldn’t see the people on stage but I didn’t have a tree to climb! I have great empathy for Zacchaeus!

What is amazing to me about this event is that Zacchaeus climbed a tree to see Jesus. The chief tax collector didn’t care how silly he might look peering down from that tree … he wanted to see Jesus! He knew he wouldn’t be able to see Jesus by squeezing through the crowd; who would step aside to let the tax collector stand in front? Nobody! He already knew that.

Instead, Zacchaeus rushed ahead to find a spot where the crowd hadn’t come yet, and there he climbed a tree. He did what it took to see Jesus.

The moment Jesus walked by, he saw Zacchaeus sitting in the tree and he spoke to the tax collector … by name! BY NAME! This despised tax collector? Why would Jesus care what his name was? But this was a divine appointment. As the story goes, Jesus called Zacchaeus down from the tree and went to dine at his house. Jesus associated with the dreaded tax collector!

And because of this encounter with the son of God, Jesus in the flesh, Zacchaeus’ life was immediately and forever changed!

As with last Sunday’s post in which I talked about personal significance, here’s a man whom Jesus found significant, worthy, loved. Not because of anything Zacchaeus had done, but because Jesus chose him and called him by name. This is Grace. How humbled I am to know and be part of this miracle!