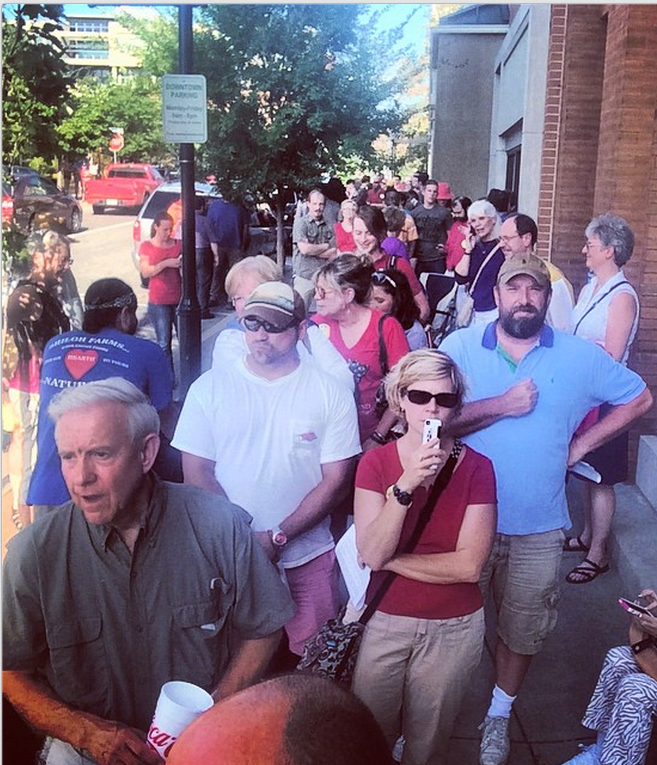 The purpose of this chapter is to protect and safeguard the right and opportunity of all persons to be free from discrimination based on real or perceived race, ethnicity, national origin, age, gender, gender identity, gender expression, familial status, marital status, socioeconomic background, religion, sexual orientation, disability and veteran status.

The overall application of this ordinance, if it’s passed, will be broad and create a chilling effect for free expression. Further, the ordinance is so broad, it would affect businesses throughout the region (not just those within the city limits) who happen to do business with the City of Fayetteville. Passage of this ordinance would cause my Beloved’s business — even though we’re located in another city — to be vulnerable to accusations of discrimination if we failed to hire someone who construed our decision to be discriminatory … even when it wasn’t! Rather than be vulnerable to such accusations, we’d probably stop doing business with the city.

Needless to say, this has been a contentious issue. Perhaps one of the biggest questions being debated in this city council meeting has been whether or not to send the question to the voters! In this heavily Democrat town, most of the people on the left are urging the council to pass the matter rather than refer it to the people.

As an example of the reluctance to have this issue referred to the voters, here are two comments that were voiced to the aldermen and alderwomen during the public comment:

1. “We need your help to do what is right for the minority.”
2. “If we let the majority vote, the minority will continue to suffer.”

Another commenter:  “The world is watching you tonight. Don’t let the rights of the minority be determined by the votes of the majority.”

The four plus hours of public comment (which have been live-streamed) dealt with amendments to the ordinance. They have yet to discuss the ordinance itself.

My overall concern with this proposal is that, no matter how accommodating the City Council tries to be with its various exceptions for religious organizations (there are churches and schools on almost every corner throughout the city), the ordinance shuts down any First Amendment right to free speech and sets up all persons of religious conviction for the loss of Constitution protection.

The City Council voted on a similar ordinance about 15 years ago. The ordinance was passed by the council and later vetoed by the mayor. The council overturned the mayor’s veto so a petition drive forced the issue on the ballot where the ordinance was rejected by a 57% vote of the residents.

This post isn’t going to produce any great insight into an issue which concerns so many in this college town. Nor is it likely to provide greater illumination or change minds or engender feelings of good will among people who have decided they’re adversaries.

But a question this complex, sweeping and personally restrictive should be sent to the voters. Why would anyone think it should not?

One thought on “Trust the People”