This week, B. gifted us (my brother and I) with a gem, a newspaper article that is amazing! Here’s the headline (below) from this July, 1901 newspaper article. (Unfortunately, the photos included with the article are of very poor quality, so I’ve cropped those out.)

The old fashioned “love story” between these two individuals is a perfect example of why I enjoy genealogy research. This is a delightful tale and the newspaper obviously found it newsworthy. The 400-word news story tells that Rev. Riemer (age 56) traveled all the way from South Africa to St. Louis with the express purpose of meeting and marrying Mrs. Pfundt (age 50). She was my second great-grandmother.

Both Riemer and Pfundt had been married before. The details of Riemer’s marriage are unknown to me though the article indicates he had two grown children. Mrs. Pfundt had borne four children and buried two as well as her first husband in 1878 after a seven-year marriage.

Their courtship was a twist on today’s romance via E-Harmony; the smitten couple learned to know each other through snail-mail, slow-boat-to-South-Africa type written correspondence. When Riemer at last arrived in St. Louis, the news story says they set the date for their wedding to be held a mere six days later!

I don’t have all the facts for Rev. Riemer’s story. In the news article, he’s slightly cryptic about how his correspondence with Mrs. Pfundt began, though he states it was at a “time of grief.” (Perhaps the loss of his wife?) At the time of the article’s publication, Riemer had lived in South Africa for the previous twenty-seven years. He was a British subject. According to the article, he planned to return to South Africa later that year. 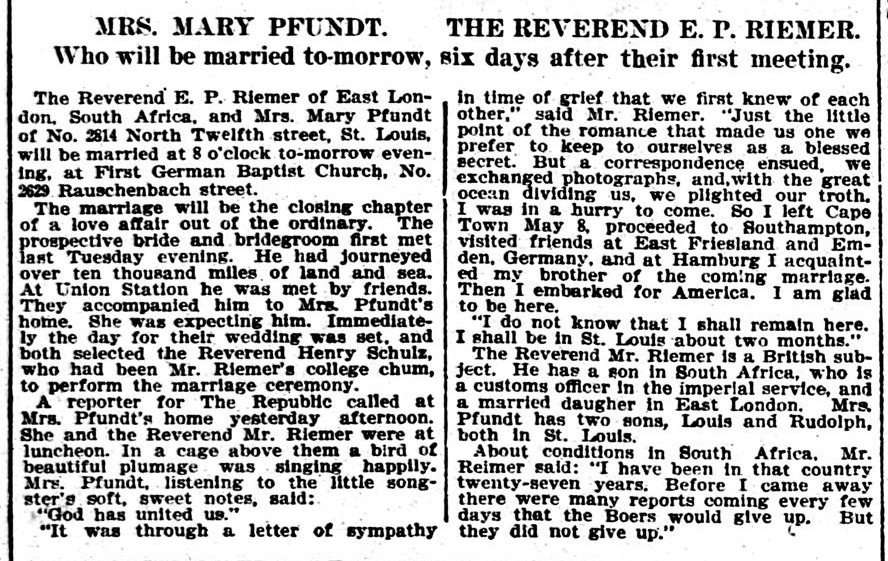 The marriage took place as scheduled. In fact, they celebrated twenty-eight years of married life before Mrs. Pfundt died in 1929. Both the 1910 and 1920 census records show they continued to live in St. Louis, in spite of Rev. Riemer’s stated wish to return to South Africa soon after his marriage. Riemer lived to the ripe old age of 97 and is buried in South Africa, so he did return; I just don’t know when.

Questions about this couple bubble up in my brain. Did Mrs. Pfundt distract Rev. Riemer from his ministry, side-tracking him from what he viewed as his calling in South Africa? Or perhaps Rev. Riemer found he could establish an effective and necessary ministry in St. Louis? (The 1910 census record shows his occupation to be “preacher.” The 1920 census notes he’s a “retired minister.“)

As Christians, we sometimes think we’re “called” to one particular lifelong ministry. This and only this is where God wants us. For someone like Rev. Riemer who lived almost a century, he had opportunity for multiple ministry opportunities. I like that he and Mrs. Pfundt took the plunge to wed, even though they hadn’t “known” each other face to face for very long. I like that they weren’t satisfied to accept the status quo of their lives (he a widower, she a widow) and let life simply pass them by. Even a man in his 50s can embrace a vision of traveling 10,000 miles to meet and marry a woman based primarily on their written correspondence!

The model of Riemer and Pfundt should inspire us! If you’ve reached a certain (arbitrary) age, don’t let it hold you back from something you really want to do! You’ve got the rest of your life! Go for it!