Detroit. Discussions of this once-regal city abound online. These are just a few:  The Remains of Detroit (a photoessay), The Abandoned City of Detroit (another excellent photoessay), Detroit’s Beautiful, Horrible Decline (more photos), The Post-Post Apocalyptic-Detroit (an article naming entrepreneurial investors who are sinking big money into the city in hopes of reviving its greatness), and The Unions Didn’t Bankrupt Detroit, But Great American Cars Did (a Forbes piece that offers an interesting point of view).

I imagine there is nothing quite like having watched this awful decline as it happened through the years. Over the weekend, my Beloved and I traveled to Detroit to attend our niece’s wedding. (A beautiful and memorable occasion, I must say.) Our trip gave us an opportunity to grasp what the links above present in their photos. Time‘s description – a beautiful, horrible decline – is amazingly apt. I would add two other descriptors … curious and weirdly fascinating.

Once a city of almost two million people, Detroit has suffered a drastic fate, but one that’s similar to other large cities where populations transitioned to the suburbs. There’s room for debate about why this happened and probably blame to be shared for the current condition of the city, but that’s not my discussion here. We can mourn for Detroit’s collapse or hope for its rebirth. Or, as my Beloved and I did, ponder the significance of this city in crisis.

In many respects, Detroit resembles a film set (writ large) for The Walking Dead, about which I’ve previously posted. Destroyed residences and commercial properties are everywhere. In the same block, one may see inhabited residences, burned-out buildings unfit for habitation, boarded-up buildings and vacant lots. Graffiti appears almost everywhere. The photo-essays provide a much more vivid presentation than my words, but it’s a curious perspective of what The New York Times calls a post-post-apocalyptic city. Even though it feels like gawking, the images demand our attention.

The city’s general destruction is a marked contrast to what we saw at The Henry Ford, a collection of exhibits and buildings that celebrate American history and tradition. The organization’s stated purpose is “to inspire people to learn from these traditions to help shape a better future.” With its emphasis on presenting the ingenuity, resourcefulness and innovation that once spurred Detroit’s economy and growth, the collection is impressive and massive. (We were time-constrained and could only visit the museum, hardly the mundane car museum I had expected.) 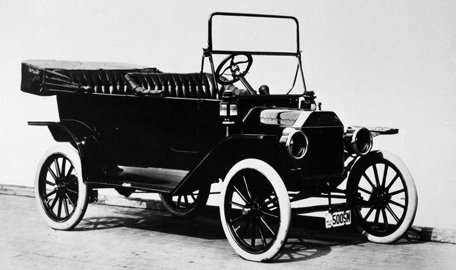 In one part of the museum, a vast array of machinery once used to produce Ford automobiles was laid out. The heavy iron equipment filled rooms! What impressed me most with every display was the can-do spirit reflected. See a problem? Design a solution! From the early days of the Model-T, the automobile industry was a model of ingenuity, resourcefulness and innovation! Every year, there were additional refinements and tweaks to make the product better.

Examples are shown throughout the museum of items (and industries) that were created or transformed when innovative products were brought to the marketplace. Even with today’s interest in vintage mania, who is willing to forego his or her smartphone?

What happened? If you read the Forbes piece (linked in the first paragraph), you might be persuaded car builders grew stagnant with their business model and failed to adopt forward-thinking, embracing yesterday’s innovation without developing a vision for tomorrow’s potential.

As I continue to think about Detroit, I’m beginning to think there’s good reason to leave it alone, a visual example and warning of what can happen when ingenuity, resourcefulness and innovation are pushed aside. It’s not that those ideals are missing in Detroit. Case in point:  if you look at the graffiti on buildings all over the city, it’s apparent the “artists” have devoted large blocks of time and effort to paint their images. Some of the brick canvases (if you will) are several stories high … meaning they found means to paint beyond normal arm’s length (resourcefulness). Reorienting those efforts into positive endeavors isn’t unreasonable, is it?

Let Detroit serve as a warning. Detroit’s vibrancy is unlikely to return until the city reconnects with what made it great in the beginning, a can-do spirit, an emphasis on core values. Let’s see if that happens.

One thought on “Whatever Happened To Can-Do?”