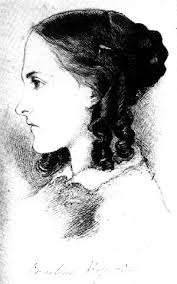 Poems from childhood are especially memorable for me. As a child, I memorized poems written by (among others) Victorian poet Christina Rossetti. (The sketch to the right was drawn by her brother, Dante Gabriel Rossetti.) From time to time, I’m reminded of Christina’s simple but profound eight-line vignette, Who Has Seen the Wind? It goes like this:

Who has seen the wind?
Neither I nor you:
But when the leaves hang trembling,
The wind is passing through

Who has seen the wind?
Neither you nor I:
But when the trees bow down their heads,
The wind is passing by.

Last week, we had an amazing display of wind in our region. One moment, the sky was clear with a storm visible to the west. Within minutes, the storm had blown in. At first, there wasn’t any rain, but the dirt-and-gravel road in front of our home churned with dust cyclones that reached twenty feet into the air. We were watching out a window as the blasts of air carried particles of debris and bent the trees violently. The wind’s impact against the house convinced us to move away from the windows. Eventually, one of the trees lining our drive toppled over.

When the rains finally came, they were heavy and ferocious, a genuine outpouring from the skies. I guessed the winds to be 40 mph or so. Reports later gauged them at 60-70 mph. Throughout the region, trees fell and other damage resulted.

This whimsical poem about the whimsical wind was begun several months before this storm, but I finished it as I reflected on that day’s powerful demonstration of wind. Giving credit where it is due, I borrowed the title from Rossetti’s poem.

2 thoughts on “Wind and Weather”