An article in today’s The Guardian caught my attention. In an especially humanizing piece, author Ed Pilkington (in Fayetteville, Arkansas, the byline notes) offers a thoughtful presentation that Hillary Clinton’s Arkansas Friends reveal a woman wanting to win on her own terms.

As with the aforementioned post, my post also originates in Fayetteville, Arkansas. And I, not normally a Hillary-watcher, found Pilkington’s observations interesting. The piece is an effort to set into context Mrs. Clinton’s email debacle news conference (earlier this week). Contrasting her admissions of , er, , er, desire for privacy and convenience to the frustrations of her earlier years and a determination to do things her way, Pilkington unveils a canvas painted by those closest to her.

I do not know Hillary, nor have our paths crossed directly. We are contemporaries and have a few similar interests. She was raised in a conservative, middle-American family (as I was). She grew up in a Chicago suburb, I grew up in suburban St. Louis. Though she and I are on opposite poles politically, that wasn’t always the case. By her own admission, in 1964 Mrs. Clinton was a Goldwater Girl, supporting the candidacy of Barry Goldwater for President. (Since the voting age back then was 21, I was mostly apolitical until after I married.)

Both of us had an early and consistent model of religious teaching from our parents and grandparents. For Hillary, in addition to her parents, a Methodist youth minister, Rev. Donald G. Jones, influenced Hillary’s religious life. She says she learned from him about “faith in action.” The parallels between my life and Hillary’s go even deeper … I’ve been known to change my hairdo at the drop of a hat!

But in all honesty, I’ve often felt sorry for her. While I admire Clinton’s grit in the face of battle (and there have been battles aplenty), I often wonder why she’s willing to keep slogging away in the political game for which she is so poorly suited.

As Peggy Noonan characterized it yesterday, Hillary Seems Tired, Not Hungry. In the natural course of one’s life around ages 65 to 70, people begin to long for a slow-down, a reordering of life where the enjoyment of grandchildren and leisure takes precedence. But for Hillary, by most news accounts, she’s gearing up to launch her 2016 campaign for President. She’s got to be tired! She’s especially got to be exhausted by the endless stream of questions she no longer wishes to consider, much less answer.

A long time ago, Hillary decided she wanted to be President. The pursuit of this ambition has defined her for the better part of three decades (maybe?). Hillary’s early school days were probably not so different than mine; the boys and only the smart girls were encouraged to believe, “I could be President one day!” I remember thinking that might be an entertaining ambition, but I soon dismissed it. Yes, the job might have some perks, but my interests were more diverse. 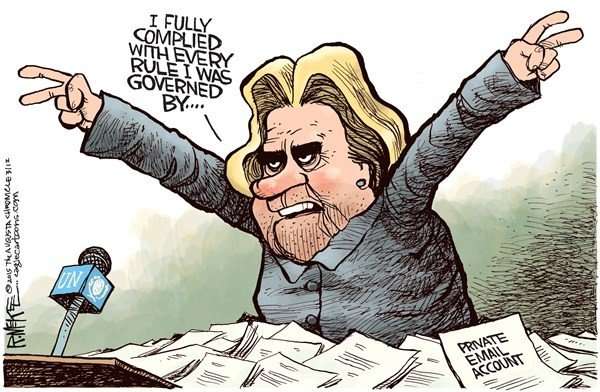 Hillary has been conjoined to this vision, almost to the point of obsession. Her discomfort with the press is just one example of the way in which her dream is turning into a nightmare. A Rolling Stone post by Matt Taibbi compares her to Richard Nixon, a re-statement of his 2008 piece offering the same idea. As the political cartoon above reflects, Taibbi isn’t the only one painfully on target here.

I can’t imagine how awful it must be to have held on for dear life to a vision (so potentially near to its fulfillment) that was seemingly yanked from her grasp in 2008. Knowing she’ll be closing in on her 70th birthday at Inauguration Day 2017, she’s well aware time is not her friend. The year 2016 is make or break for her.

She could save herself the aggravation that was on display at her recent press conference … by deciding to forego the ambition and instead, choose to enjoy the company of her family … her husband, daughter and granddaughter for whatever years remain for her on this earth. In my view, that would be winning on her own terms.

Someday I suppose there will be a woman who succeeds in becoming POTUS. It shouldn’t be Hillary. The sooner that thought crystalizes in her mind, the better off we’ll all be. That’s what I consider a win-win.