When driving in town this afternoon, I drove by the old home place, our first home purchased in 1977. 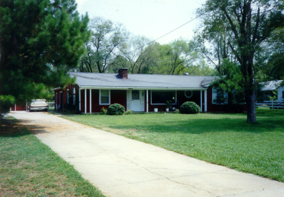 My Beloved and I were a young couple with two small daughters (one barely 3 years old and the other 6 months of age). We had a checkbook with a balance that usually amounted to a couple hundred dollars. Our housing budget was minimal.

The house we found was too large (over 2,000 square feet) for our small family and it needed plenty of work. We purchased it with the expectation we’d eventually have other children. We didn’t mind a “fixer-upper” because we were young enough to embrace the challenge of improving a property.

I can’t recall when the above picture was taken, but this is the place with which we “fell in love.” If you look closely at the picture, you’ll notice my Beloved’s 1966 Pontiac LeMans convertible is visible in the left center at the end of the driveway. (How he’d love to have another one of those!)

This wasn’t a deluxe place, just lots of space and a homey feel where our children could comfortably grow up. When we moved into the house, our daughters were so young, they didn’t bring many memories of previous residences; this place was their home. Our sons were born during the earlier years we lived there, so this is the residence they also associate as home. By the time we moved from the property in 2000, we’d lived through more than two decades as the surrounding pasture lands were developed into subdivisions and the sleepy flow of traffic up and down our street had turned into a busy thoroughfare.

We “sold” the property several times … experiencing our own little housing bubble issues. The first “buyer” was a deadbeat who always paid his rent in cash, but only every other month. He was quickly booted. The second couple were more responsible about their “rent-to-own” agreement, but he ran into problems with an ex-wife and voluntarily returned the property to us before filing bankruptcy. (That was a relief!)

The next couple also requested a “rent-to-own” arrangement. We were skeptical because they had already had one foreclosure in their history. Eventually, we agreed to the arrangement with a 10% down payment, and this couple operated a small business, using the four bedroom property to shelter elderly individuals in their final months of life. They agreed to obtain a conventional mortgage after two years doing the “rent-to-own.”

Last year, we heard from a friend that this couple had lost the place in foreclosure. Apparently, after years caring for dying residents in this caring home setting, they were unable to obtain new residents and their income dried up.

When I drove by the property today, the grass was overgrown and it remains vacant. It’s not listed for sale; in fact, the county still lists the property being owned by the couple who took care of elderly dying folks. I’ve been told the foreclosure wheels grind slowly and without any understandable time frame.

In some ways, it’s not the same house our family knew. From the time we bought it, the exterior was painted a deep red with white shutters and trim (as pictured above). The lot, nearly half an acre, was bordered by a white three-rail fence. There were tall pine trees bordering the north side of the drive and several large trees (including a massive blue spruce) in the front yard.

Today, the house is yellow with white trim and black shutters. An extra lane of concrete parallels the driveway shown in my picture. Pine trees and blue spruce are gone. The white fence has been replaced by a wood-colored picket fence barely three feet high. That’s just the exterior.

I haven’t seen the inside. Did they keep the stone fireplace? The beautiful knotty pine walls in the living room? The spacious rounded bar we installed to accommodate our large family? The built-in hutch with its sliding glass doors?

It wouldn’t be the same house I remember, that I know. But I can almost hear the whispers as I imagine walking through each room … my children giggling and sometimes wrangling with each other … all of us gathered around the Christmas tree singing, laughing and praying. All the memories, yes, even some sad ones, embodied by one flawed but cherishable and cherished place.

There was a novel from 1940 called You Can’t Go Home Again. I half believe the title. Call me crazy, but if that house comes back on the market, I may look quite seriously at buying it as a rental.